“The Game” Over: Bucks Edge Wolverines 31-20, As The Legend Of Haskins Begins 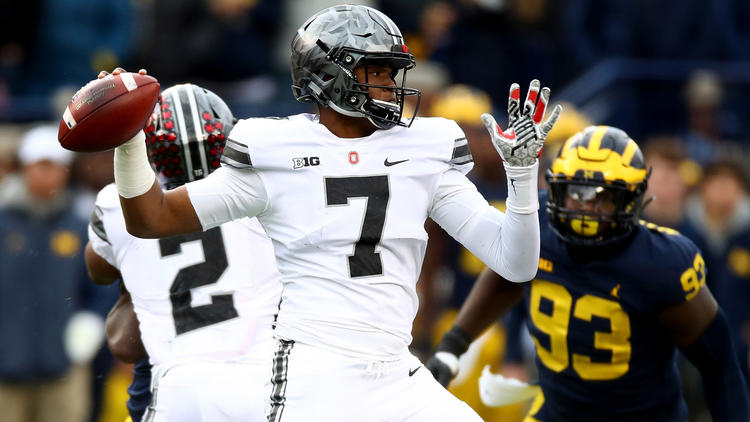 College football’s greatest rivalry, known by Midwesterners as “The Game,” exceeded the expectations of many who thought Ohio State would roll through Michigan with ease. The Wolverines quickly disputed that assumption, reminding the audience that, in this rivalry, nothing comes easy. Still, Ohio State maintained their recent dominance over the Team Up North, winning their sixth consecutive game in the matchup, 31-20.

After exchanging punts to begin the game, Michigan was able to strike first on a 13-play drive. It marked the start of a rushing attack that proved problematic for the Silver Bullets. That drive ended with a Khalid Hill run up the gut for a two-yard score.

As the first quarter came to a close, Michigan’s Donovan Peoples-Jones returned a Buckeye punt for 42 yards, setting up the Wolverines’ second score, a three-yard zip from John O’Korn to Sean McKeon. Michigan led 14-0.

This time, however, Ohio State answered. On a third and four from Michigan’s 16, JT Barrett ran untouched into the end zone. A delay of game penalty reversed the score, but Barrett, undeterred, did it all over again from 21 yards out to put his team on the board.

Ohio State would keep their momentum moving on their ensuing drive, when Barrett found his tight end Marcus Baugh wide open for a 25-yard pass down the middle.

Both squads started off the second half slowly, but in the Wolverines’ second possession of the half, O’Korn managed a 43-yard completion to Kekoa Crawford on a screen pass, setting up a two-yard touchdown run by Karan Higdon to regain the lead. The extra point would then be blocked, making the score 20-14.

The subsequent possession by Ohio State marked a crucial turning point in the matchup. Barrett re-aggrivated a nagging meniscus injury on a second down carry, and had to leave the game. Redshirt freshman Dwayne Haskins stepped in with his team down.

After picking up the initial first down, the Buckeyes were again faced with a critical third down. Two successive false start penalties followed. Then, Haskins made perhaps the play of the game, on a 27-yard dart to Austin Mack, surrounded by two defenders. Mack took a shot, but held onto the ball.

From there, Haskins scrambled for 22 yards, and J.K. Dobbins capped the drive off with a one-yard burst to give the Bucks their first lead of the game, 21-20.

Ohio State notched a field goal on their next drive to go up 24-20.

With Michigan threatening on Ohio State’s 39, the Buckeye defense forced a turnover on downs, and got the ball back.

However, they were not able to capitalize, as Sean Neurnberger missed a field goal wide left.

With 2:47 remaining in regulation, the Wolverines had a chance to strike.

On the first play, O’Korn overthrew his target and was picked off by Jordan Fuller.

As a result, the Buckeyes were able to put the game away, as Detroit native Mike Weber cut back and took the ball to the house in the Big House from 25-yards out to bring the score tally to 31-20, the game’s eventual final.

This season is not over for the Buckeyes, as they will take on the Big Ten West champion Wisconsin Badgers in the conference title game. The big question that remains is who will start at quarterback. With the uncertainty surrounding Barrett, Haskins could ultimately be chosen to lead his team.

If this does mark the end of Barrett’s playing career in Columbus, he can still hold his head high, as he has become the only starting quarterback in “the Game’s” history to win four pairs of golden pants (The “trophy,” given to the victors of the annual matchup.).

Ironically enough, in 2014, Barrett suffered a broken leg during “The Game,” and was replaced by then-backup Cardale Jones. The rest is history.

Saturday’s showcase did not seem all that dissimilar.