“Frankly, Pretty Good is Not What We’re Here For.” David Griffin Speaks on Firing of David Blatt 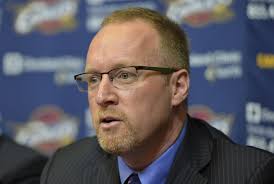 Cavs General Manager David Griffin spoke to the media Friday night and described the reasons for the firing of David Blatt.

Griffin announced that Tyronn Lue will be taking over as head coach, not on an interim basis.

Griffin spoke about a “lack of fit,” a lack of connection, and lack of spirit he has noticed among the team for roughly the last month.

He told reporters he did not talk to players, it was his decision, and he received approval from ownership. “LeBron [James] doesn’t run this organization,” Griffin added, “this narrative that we’re somehow taking direction from him isn’t fair.”

Griffin mentioned that being at the halfway point of the season meant there was still enough time to “right the ship.”

One of the opening statements that Griffin made was “Pretty good is not what we’re here for.”

And based on the GM’s tone at the press conference, what he saw through 41 games this season, he did not feel the team would finish with any results better than “pretty good” if this change was not made.

Griffin did not have anything negative to say specifically about Blatt, but said “this team has not handled expectation well.”

Griffin ended the press conference by saying, “Blatt’s first inkling of this happened today in my office.”