For Once, Stars Who’ve Departed Cleveland Have Little to Brag About 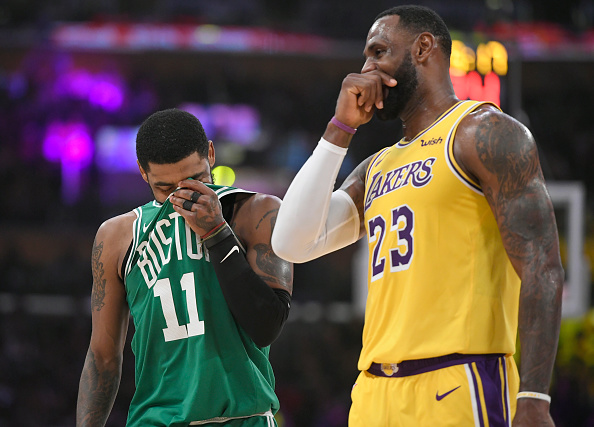 Star athletes leaving Cleveland sports teams is hardly a new concept. Fans have come to accept the fact that, whenever a local player becomes a household name, the expectation is he’ll eventually find himself on a new team. When this occurs, more often than not, those players thrive while the team they left behind picks up the rubble.

Frankly, this is what makes the situations LeBron James and Kyrie Irving find themselves a little enjoyable.

No, the Cleveland Cavaliers aren’t anyone’s idea of a contender without them. Still it’s rare to see athletes of their stature leave Northeast Ohio and find out the pastures aren’t greener.

In case you’ve missed it, the last couple days have been more than a little unpleasant for the former Cavs superstars.

Irving – who demanded a trade from Cleveland to prove he could lead a team on his own – is currently reviled in Boston. The Celtics were unceremoniously bounced from the playoffs by the Milwaukee Bucks, thanks in part to four consecutive putrid showings from their star point guard.

To add salt to the wound, Irving appears to have driven a wedge between himself and everyone else within the Celtics organization, and is expected to leave in free agency this summer.

On the opposite coast, James’ new team – the Los Angeles Lakers – have been bumbling their search for a new head coach after a letdown season. While a reunion with Tyronn Lue appeared to be a certainty, it was nixed last night when the Lakers short-changed him on both salary and freedom to choose his staff.

It’s gotten so bad L.A. fans are planning a protest to voice their displeasure with the franchise, some of which being aimed towards James.

There’s no guarantee James and Irving experience the same level of adversity from here on out. For all we know, each may find their situation improve as soon as next season.

Likewise, the Cavs are hardly anyone’s idea of a contender. This will be the case no matter who they draft with their lottery pick next month. The last thing a 19-win team has much of is bragging rights.

At the same time, when you consider how often Cleveland fans have their faces rubbed in the successes of departed stars, it’s admittedly entertaining to see a different outcome this time around.

Again, this usually isn’t the drill. Typically, when stars leave Cleveland, victories come quickly while the team they left behind is in disarray.

James won two titles the first time he fled the Cavs for Miami. Manny Ramirez did the same when he priced himself out of the Indians’ range and joined the Red Sox. The entire Browns franchise was ripped away, re-branded as the Baltimore Ravens and won a Super Bowl within four years of moving from Cleveland.

As a result, it wasn’t a leap to assume both Irving and James would have the time of their lives in their new cities while the Cavs attempted another grueling and lengthy rebuild. That’s just how these things go.

Instead, James’ Lakers team appears to be dealing with more front office chaos than the Cleveland franchise he left behind. Irving may very well have alienated everyone in Boston on his way out of town.

Simply put, neither player has a ton to gloat about.

Does that make the Cavs’ situation any better? Not at all. They still need to figure out how to become competitive without James, something they haven’t been able to do since the 90’s.

That said, Cleveland fans spend their lives being told their favorite players will see more success in bigger markets. For the time being, it’s OK to relish the fact that isn’t happening.