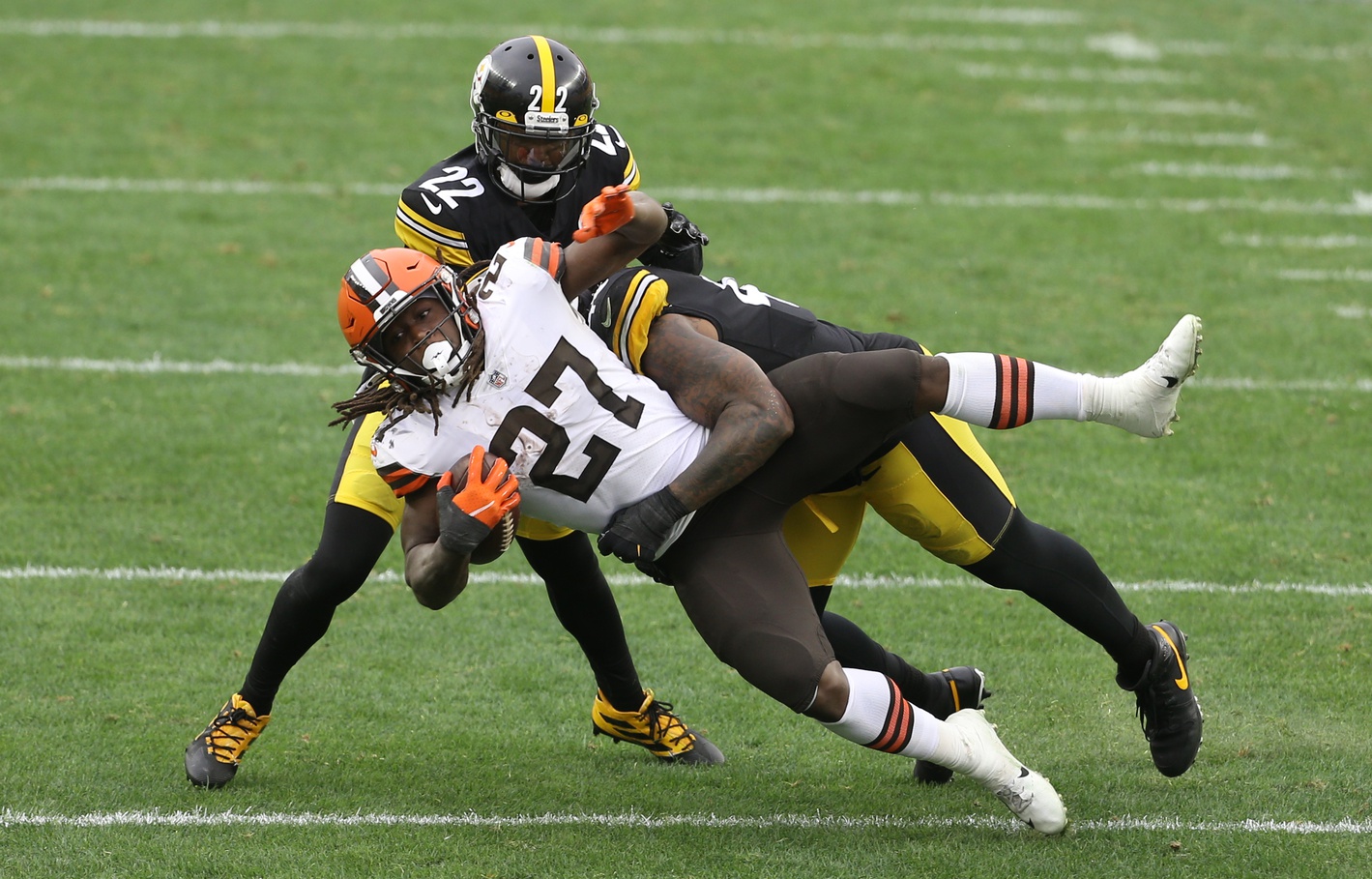 In a near midseason AFC North battle, the Cleveland Browns traveled to Heinz Field to take on the Pittsburgh Steelers in a 1:00 p.m showdown to remain tied atop the division. The Showdown that was promised failed to come to fruition.

A terrible first half from Baker Mayfield and the offense had the Browns down 17 at halftime, only to be continued into the second half as the Steelers defense stood strong, as the Browns fell 38-7 to the Steelers.

The Browns opened the game on defense to bring out Ben Roethlisberger and the Steelers offense. The defense forced a third down two plays later, however a 27 yard connection down the sideline from Roethlisberger to James Washington kept the drive alive. The Steelers now had the ball in Cleveland territory, and drove all the way to the Cleveland 17, before being forced to settle for a field goal.

Kareem Hunt and Mayfield opened up the Browns’ day on offense with runs of two and five respectively to set up a third and short. Steelers safety Minkah Fitzpatrick would read the play perfectly on the third down try, intercepting Mayfield across the middle, returning the ball for a touchdown to give the Steelers a quick 10-0 lead.

After the return, the Browns offense would look to create some momentum for themselves after the disastrous start. However, the Steelers defense stood strong, sacking Mayfield on a third and six to force a three and out.

Despite the lead telling a different story, the Browns defense was the lone bright spot early in the day. Forcing a three and out in the ensuing drive to keep the deficit at 10.

Mayfield opened up the following drive finding Bryant for 11 yards, before Hunt found some space for 10 yards, giving the Browns two quick first downs into Pittsburgh territory. Despite the hot start, a Devin Bush sack of Mayfield on second down would halt the momentum, before an incompletion on third down forced a Jamie Gillan punt.

With just under three minutes to go in the opening quarter, finding themselves down 10 the Browns defense continued to stand tall to force another three and out.

The Browns offense took over near midfield with the next possession, and after Mayfield found Hunt for 12 yards on second down, the Browns found themselves in Pittsburgh territory to end the first quarter.

D’Ernest Johnson opened the second quarter with a first down run of six to the 37, before two straight incompletions forced a fourth and four. Needing a spark in the game, Browns head coach Kevin Stefanski opted to keep the offense on the field on fourth. However, a false start penalty from Jedrick Wills would move the Browns back to force a punt.

Ben Roethlisberger marched the Steelers offense down the field with their opening drive of the second quarter, finding Chase Claypool on a second down completion for 36 yards to set up a James Conner three yard touchdown.

The Browns were down 17 with just over ten minutes to go in the first half, and desperately needed a spark. Unfortunately, disaster struck once again, as Mayfield would try to overcome a first down penalty on third and long, throwing an interception to Cameron Sutton at midfield.

Taking over at midfield, Roethlisberger and the Steelers offense took advantage, taking only four plays before Roethlisberger found Washington for a 28 yard touchdown to go up 24.

Facing the huge deficit with the half winding down, the Browns offense was desperate. After a neutral zone penalty on T.J Watt kept the Browns drive alive, Mayfield found Austin Hooper deep left for 36 yards to the Pittsburgh 26. A penalty on Joe Haden for illegal contact would call back the third interception on Mayfield, before he found Rashard Higgins in the endzone four plays later for a 13 yard score.

Both offenses traded three and outs following the Browns’ score, before a Roethlisberger kneel down ended the half with the Steelers leading the Browns 24-7.

The Browns opened the second half on offense needing a score to keep themselves in the game, however the Steelers defense would continue to stand tall, forcing another three and out.

On offense, the Steelers would put together a long five minute drive to open their second half, however a pass interference penalty on Eric Ebron on third down halted the drive, forcing a punt two plays later from the Cleveland 40.

Facing a second straight three and out in the second half with the next possession, the Browns offense opted to go for a fourth and one from their own 29. However, Hunt would be swallowed up in the backfield for a one yard loss, turning the ball over on downs.

The Steelers were once again gifted the ball in Browns territory, taking their time to score with Chase Claypool finding the end zone on a three play run to put the Steelers up 31-7 with 58 seconds left in the third quarter.

The route was on as the Browns found themselves down 24 with time winding down. Case Keenum would come on to replace Mayfield to start the next possession, driving the offense into Pittsburgh territory and the fourth quarter. However, a fourth down incompletion from Keenum to Hunt would turn the ball over to the Steelers offense at the Pittsburgh 45.

The Steelers offense would spend nearly six minutes putting the finishing touches on the Browns defense, taking seven plays to run to the Cleveland 27, before a 23 yard pass to Claypool set up a Benny Snell Jr. one yard touchdown.

The Browns were now down 31 with eight minutes to go in the game, however the offense wouldn’t be able to mount much, turning the ball over five plays later.

Mason Rudolph would replace Roethlisberger with the Steelers next possession as both teams turned to the reserves to finish out the game, as the Steelers dominated the Browns on their way to a 38-7 win. Despite the loss, the Browns still sit at 4-2 on the season and in contention for a wild card playoff spot.