Is Destiny Set To Bring Cleveland Their Long Awaited Championship? 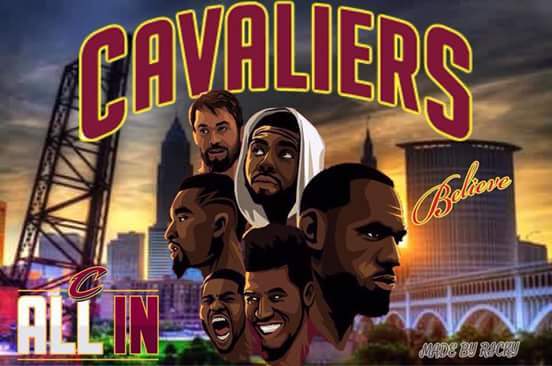 Perhaps it was written in the stars for it to happen this way. In many ways it almost seemed too simple the first time around. A struggling basketball town in desperate search for a savior wins a magical lottery. The next thing you know the “chosen one” from the hometown school of St. Vincent St Mary is drafted as the next big thing to bring Cleveland out of the doldrums. And sure enough he did exactly that in his first tenure here!

LeBron James and the Cavs went to multiple Eastern Conference Finals and even one NBA Finals in his first stint. He won two regular season MVP awards and it looked like they were on the cusp of winning it all several times before he left for South Beach. The day he did make “the decision” has forever since lived in infamy and many Cleveland fans cringe at the simple thought of that ugly night.

Then in the summer of 2014, a drama unfolded worthy of a Hollywood script as the hometown boy craved and found his redemption in the form of a beautiful letter to the fans announcing his return. The results were felt immediately as he led the Cavaliers back to the playoffs before his team was ravaged with injuries. They fought extremely hard and LeBron James played the best series of his life, the best series some say, in all of NBA Finals History. But it simply wasn’t enough as the Golden State Warriors celebrated on the hardwood in Cleveland. It has been less than a year since the Cleveland fans lived through that nightmare and the thirst for revenge is strong.

It was 1964 the last time Cleveland won a major sporting world championship. It seemed unfathomable to think that they have gone over 50 years without a major championship since. The Browns and Barons had both dominated in the 40’s and 50’s, however since, the trophy case in Cleveland has gone dusty and bare.

Cleveland fans had to suffer through a last second drive and a goal line fumble keeping them from reaching the Super Bowl. Their Browns would eventually move away all together and re-locate to Baltimore in 1995 in a move that seemed surreal and felt like a really bad dream as opposed to harsh, cold reality.

Baseball fans watched as their precious Tribe, a team so steeped in tradition and heart -fell just short of a World Series Title as they crumpled in the closing moments of a Game Seven they had control of the whole time until the end. Are the Cavs the team to finally stop the steak? It was their third NBA Finals appearance. They were swept by a dynasty in 07 named the San Antonio Spurs and gave the Warriors everything they could handle in 2015 before once again failing short.

Perhaps the tides are finally changing in the summer of 2016. It isn’t just the Cavs, but the entire city of Cleveland that has been on the rise. The Republican National Convention has agreed to land down at the Quicken Loans Arena in Mid July. The Lake Erie Monsters Hockey Team is on the doorstep of winning the Calder Cup Championship. MMA fighter Stipe Miocic and Cleveland native has recently become the UFC Heavyweight Champion of the World. Even Hollywood is getting in on the act as two minutes from the Quicken Loans Arena, producers and directors are filming a “Fast and the Furious” movie. Cleveland is suddenly the place to be and the cherry on the sundae would be the Cavaliers championship.

Despite the heavy odds against them, the Cavaliers now have a date with destiny! Standing in their way is a Goliath giant of a challenger, but Cleveland is ready to pick up their heaviest rock and sling it!