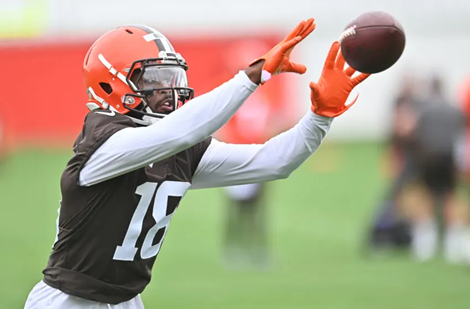 Wide receiver David Bell is the secret weapon for the Browns. Bell was drafted 99th overall in the 2022 NFL Draft out of Purdue. He has flown under the radar since being drafted. Mostly due to his poor combine performance where he ran a 4.65 forty-yard dash. This slow time caused him to slide in the draft after being a consensus late 1st to early second round pick.

Bell’s production tells another story though as he was one of the Big Ten’s best receivers. He is also only the 18th wide receiver ever picked out of Purdue since 1962. Thus making him even more impressive.

The young wide receiver was born in Indianapolis, Indiana on December 14th, 2000. He graduated from Warren Central High School in Indianapolis, IN. Bell was named a first team All-State selection, Indiana Mr. Football runner-up, and was named the Indiana Gatorade player of the year, while leading his team to a state championship as a senior going 14-0.

Bell would make his name known as a freshman starting all 12 games for the Boilermakers. He would catch 86 passes for 1,035 yards and 8 total touchdowns on the season. Bell would be named to Big Ten Freshman of the Year and earn second team All-Big Ten honors. Unfortunately, due to a shoulder injury in 2020 Bell only played in 6 games but still recorded over 600 yards receiving.

Bell would bounce back though in 2021 with a monster season. In 2021, Bell would catch 93 passes for 1, 286 yards and 6 touchdowns in 11 games. Bell would be named a consensus First Team All American and the Richter-Howard Receiver of the Year.

Bell would declare for the draft after the 2021 season where he would be invited to the NFL Combine. At the combine Bell would hurt his draft stock due to not testing extremely athletically with a 4.65 forty-yard dash. This would cause him to go from an early second round prospect all the way to a 3rd or 4th round receiver.

Bell would have to wait late into night two of the draft for his name to be called by the Cleveland Browns. He would be selected in the 3rd round with the 99th pick overall proving that the 40-yard dash time would hurt his stock even with great production. Kevin Stefanski was quoted as saying to Andrew Berry, “We cannot leave the draft without David Bell.” The young wide receiver was the first player Coach Kevin Stefanski watched.

Bell is looking to show the Browns that he can be a productive player in the pros even with his below average 40 time. He has already shown flashes with many saying he has been the most impressive rookie so far. He’s yet to drop a pass.

The streak lives on for David Bell. #Browns pic.twitter.com/4L46d0NnfL

While Bell’s journey is just getting started he has shown why Kevin Stefanski was so high on him as a prospect. The rookie will be asked to play a significant role as the slot receiver replacing fan favorite Jarvis Landry.

Congrats David, I am looking forward to rooting for you in the brown and orange.