The Crew Cap: More of the same – Columbus loses to Sporting KC in Stoppage Time 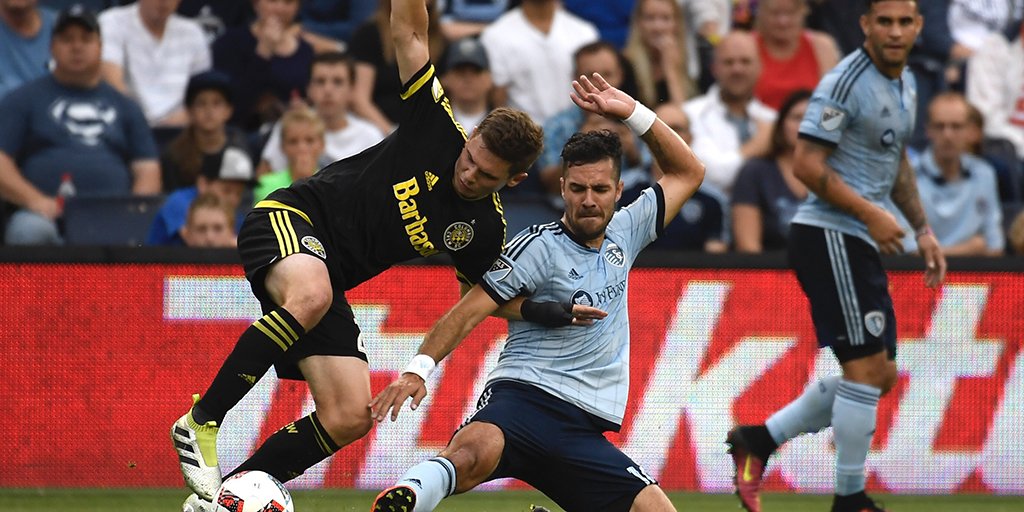 In the 22’ Crew SC defender Harrison Afful forced a SKC turnover in their own third which Afful turned into a timely cross to hit Ola Kamara near the back post for the goal.

Ethan Findlay would get the hockey assist along with Afful. That would be the only goal in the first half and Columbus would go into half time up 1-0.

As for the second half, in the 49’ Crew SC’s Tyson Wahl would commit a penalty in the box and be assessed a red card, which gave Sporting KC the penalty kick. Benny Feilhaber would take the PK for Kansas City, and score, to tie the game at 1 apiece. Columbus would play the rest of the game a man short.

In the 56‘ SKC’s Graham Zusi would win a 50-50 ball at mid-field and weave into the final third of Columbus by himself and strike the ball past Crew SC keeper Steve Clark to put SKC up 2-1.

Roger Espinoza would get the “assist”. The defense was spread a bit thin, but you have to recognize a good shot when you see one.

The Crew SC would answer back in the 74’. Ola Kamara would score his second goal of the game off a beautiful pass from Tony Tchani. Kamara was able to avoid the offside call and beat his defender and finish the play with ball in the back of the net.

Sporting KC would however score one minute in to stoppage time off a pour defensive clearance by Columbus in which Ike Opara would send a long high cross to the back post for Jimmy Medranda to head back toward the front of the goal where an open Matt Besler was waiting to head the ball into the net for the winning goal. The game would end 3-2 Sporting KC.

Take away: Columbus seems to have this uncanny ability to get your hopes up early in games, and somehow never fail to disappoint you by the end yet showing glimpses of potential and hope. They had good pace and energy during the start of the game, but it seems as though they become complacent in scoring one solitary goal, and they call it a day.

This was the point in the season where you as a club can do two things, you either try to make a run at the last playoff spot, or you just fizzle out and the rest of the season will be to see who is sticking around for next season. The Crew SC is clearly the latter. This game, Columbus was out shot 18 (9) to 6 (5).

Columbus has now given up 10 goals total in the second half this season, which is the most in MLS and still has not won on the road this season. Crew SC now has an overall record of 3 wins, 7 losses, and 7 draws and STILL remains near the bottom of the Eastern Conference with no sign of improving.

Columbus was without veteran mid-fielder Federico Higuain who will miss his second game in a row due to hernia surgery and will be out for at least another month.

Next up for Crew SC is an away match in Gillette Stadium (home of the New England Patriots) to take on old friend Kei Kamara and the New England Revolution, Saturday, July 9th, at 7:30 PM ET.