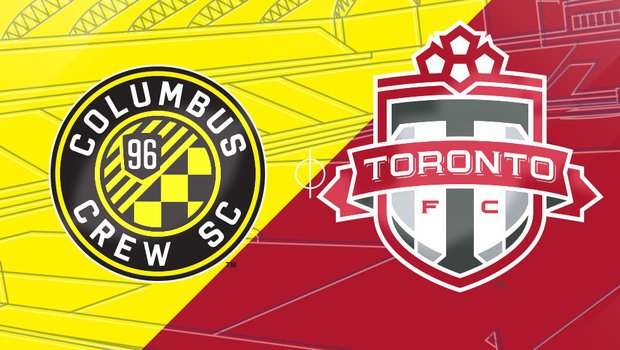 These games are becoming more difficult to watch. The quick starts and the inevitable let down. Also, the inability to capitalize at home.

Despite possessing the ball what seemed like 85% of the first half, 4 corners, and 5 shots, Columbus and Toronto went into half time scoreless. Columbus was very good at forcing turnovers

During a half time interview with TWC Sports Channel, Coach Berhalter stressed at the half “quicker ball movement” would be needed in order for strikers such as Justin Meram and Ola Kamara to capitalize on one of the many opportunities that the attack is creating.

But, you need to give credit as well to the Toronto FC defense with 12 clearances and a scoreless half.

As for the second half, the Crew SC would capitalize on a corner kick set. The Initial deflection was headed out by Toronto, and without hesitation Harrison Afful would score off a one-time, dynamite volley strike from near the top of the box to put the Crew SC up 1-0 in the 54’.

However the crowd would be silenced in the 63’ by Toronto’s Jordan Hamilton. Hamilton would penetrate the flat Columbus defense and catch the Crew SC in that inevitable moment that occurs every game where they just seem to lose focus and shoot themselves in the feet. Puns intended.

That tying goal would prove to be the final goal and take the one point tie from Columbus at home. The Crew SC now has an overall record of 3 wins, 7 losses, and 8 draws.

Columbus Crew SC’s search continues for answers in the absence of departed Kei Kamara and injured Federico Higuain. I did like the play of a few players such as Afful, Corey Ashe, and Kamara. Players such as Justin Meram and Ethan Findlay did not have good games.

Next up for Crew SC is another home match against D.C. United, July 16th, at 7:30 ET. D.C. United are trying there best to sneak into the last playoff spot, which is currently occupied by New England with 22 points.

The Crew Cap: Kei gets the laugh for now, Crew SC loses 3-1
Crew Cap: Columbus can’t keep it together for 90 minutes…again