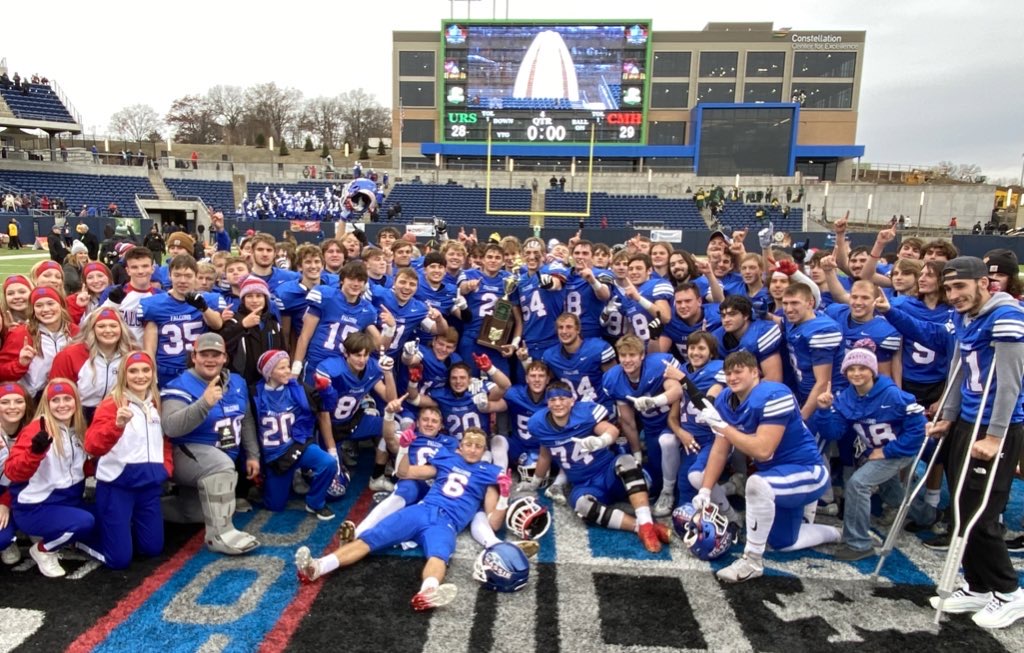 CANTON, Ohio – When a 26-yard fourth down touchdown put Ursuline on top 28-7, it would have been easy for Clinton-Massie to falter.

However, the Falcons stayed strong, roaring back to stun Ursuline 29-28 in the final seconds of the Division IV State Championship on Friday.

Clinton-Massie did get on the scoreboard first, using up over nine minutes before a 2-yard touchdown by Carson Van Hoose.

Clinton-Massie uses up most of the quarter on their opening drive, capping it off with a 2-yard TD by Carson Van Hoose. pic.twitter.com/pt9H2i8d3b

The onslaught started with a pair of DeMarcus McElroy touchdown carries, followed by a 39-yard touchdown pass from Brady Shannon to Jakylan Irving.

They go for two again, but the pass is knocked down. pic.twitter.com/hnu93XIOUB

Leading 21-7 to start the second half, Ursuline continued to dominate on both sides of the ball.

Shannon would throw his second touchdown of the game with 5:23 to play in the third quarter, finding Harvard commit Dean Boyd to put the Irish on top 28-7.

Clinton-Massie takes a huge gut-punch, as Brady Shannon hits Harvard commit Dean Boyd for a 26-yard TD on fourth down.

Shortly after this gut-wrenching play, Clinton-Massie would start to build some momentum of their own.

Their comeback started with a 49-yard quarterback keeper by Kody Zantene to cut the deficit to 28-14.

Then early in the fourth, Clinton-Massie would fumble at the goal line, but it ended up in the hands of lineman Garrett Vance for another Falcon touchdown.

Garrett Vance recovers a fumble in the end zone for a Clinton-Massie touchdown.

The defense would continue to hold Ursuline scoreless in the fourth quarter before another impressive Clinton-Massie drive put them deep in Irish territory.

On fourth down, with 45 seconds left in regulation and the season on the line, coach Dan McSurley pulled out what might go down as one of the most brilliant play calls in state championship history.

With everyone on the Ursuline defense expecting a run up the middle, Zantene concealed the ball, started a slow walk backwards, then took off to the right side for a touchdown.

An incredible play! On fourth down, Massie fools the entire defense for the TD!

Then, trailing 28-27, Van Hoose scored what would be the game-winning two point conversion to seal a 29-28 victory for Clinton-Massie.

Clinton-Massie takes a 29-28 lead on a two point conversion with 45 seconds left!

They’ve outscored Ursuline 22-0 since the 5:23 mark of the third quarter. https://t.co/dq6PNTfcGB pic.twitter.com/2KI7WNy7vL

It was a thrilling game, with the two teams combining for 717 yards of offense. In the end, it was Clinton-Massie taking home the hardware to Clarksville.