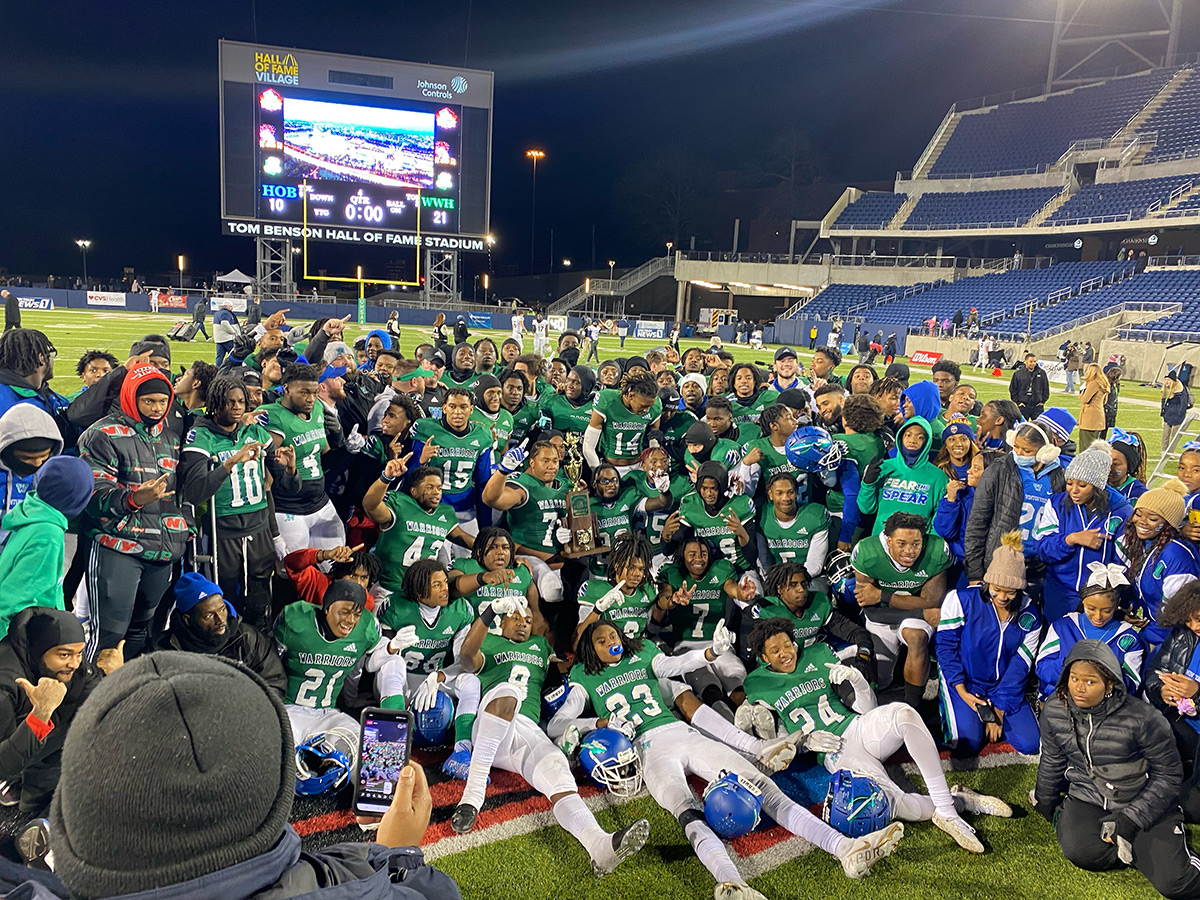 CANTON, Ohio – Winton Woods came into the regional playoffs as a 7-seed.

Backed by a gritty “nobody believed in us” attitude, the Warriors rolled to a 21-10 victory over Akron Archbishop Hoban in the Division II State Championship on Thursday night.

It was a pretty quiet start, with neither team putting up any points through the first quarter.

In the final minute of the first, Winton Woods was ruled down on a punt attempt that gave Hoban possession deep in opposing territory.

Winton Woods’ punter was ruled down before the ball was kicked, giving Hoban possession at the WW 10-yard line. pic.twitter.com/lRaeyMjFDe

The Warriors defense held their ground, only giving up a 20-yard field goal from Charlie Durkin to start the second quarter.

A 20-yard FG by Charlie Durkin is the first score of this defensive battle! 🙌 pic.twitter.com/UKOfU06Diy

Winton Woods had a response for both of Hoban’s scores in this game. After giving up the field goal, they swiftly drove down field and punched in a 4-yard touchdown courtesy of Buddy Ellery.

The Warriors are on the board! pic.twitter.com/iCMMpR5goO

Then with under a minute to play before halftime, TyRek Spikes, who rushed for 98 yards in the first half alone, broke off a 44-yard run.

Spikes followed that up with a 2-yard touchdown to give Winton Woods a 14-3 lead heading into the break.

Ty’rek Spikes absorbs a hard hit to get in for the WW touchdown.

Spikes has 98 yards and now a TD in the first half. pic.twitter.com/2PUUm5LM4w

Hoban was faced with an unfamiliar situation, as they went into the locker room trailing by double-digits.

On the first play from scrimmage in the second half, Caleb Kepler (8 Tackles, 4 TFL, 2 FF, 2 FR) ripped the ball away from Spikes and returned it for a touchdown, cutting the deficit to 14-10.

What a way to start the half!

Caleb Kepler strips the ball away and takes it himself for a touchdown on the first play of the half!

Two FR’s on the night for Kepler. pic.twitter.com/lpTsgvTMgF

This appeared to be a potential turning point, but Winton Woods once again responded quickly, this time with a 53-yard touchdown run by KC Spears to increase the Warrior lead to 21-10.

Winton Woods quickly responds with a 53-yard TD run, this one coming from KC Spears. pic.twitter.com/qbnGQKkAsk

This is where the score would stay for the remainder of the game.

Despite losing three fumbles, including one in the fourth quarter, Winton Woods remained in the driver seat for most of the game.

This was largely in part to their defense, which didn’t allow any touchdowns, holding Hoban to under 200 yards of total offense.

An interception by Lorenzo Hudson all but ended this game, as Winton Woods went on to win 21-10.

Winton Woods is just a few minutes away from taking down Hoban. pic.twitter.com/qVrA3fESSE

For the first time in over a decade, Winton Woods is taking the hardware home to Cincy!

The Warriors offense rushed for nearly 300 yards, while the defense held Hoban out of the end zone. pic.twitter.com/RouU3ashRf

The Warriors rushed for 288 yards, with 153 of those coming from 5-foot-5 senior TyRek Spikes. Quarterback Buddy Ellery had 92, followed by KC Spears with 60.

It’ll be a night to remember for this Winton Woods squad, who will be making the three hour trip back to Cincinnati with an extra passenger; The 2021 Division II State Championship trophy.

St. Edward’s Michael Bova Walking Tall, Ready To Take The Next Step
Clinton-Massie Surges Back From 21 Down To Win Division IV State Title Over Ursuline, 29-28