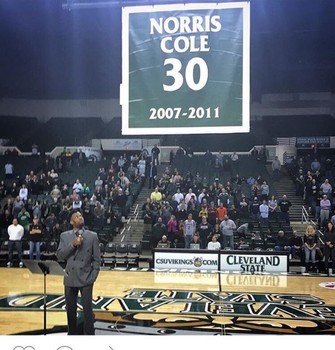 CLEVELAND – New Orleans Pelicans point guard Norris Cole has already had a very special day and his team has yet to take the court at Quicken Loans Arena against the Cleveland Cavaliers on this first Saturday in the month of February.

Cole becomes just the third player in Vikings basketball history to have his jersey retired. Cole’s number 30 joins the number 14 jersey of Franklin Edwards and the number 10 of Ken “Mouse” McFadden as the only Vikings men’s basketball players to have their numbers retired by Cleveland State.

Cole wore the green and white of the Cleveland State Vikings from 2007 thru 2011. Cole was named the Horizon League’s offensive and defensive player of the year his senior season and helped the Vikings win the Horizon League championship and advance to the NCAA tournament in 2009.

Cole and the Vikings upset the Butler Bulldogs at historic Hinkle Fieldhouse to advance to the NCAA tournament. The Vikings as a number 13 seed would upset the fourth seeded Wake Forest Demon Deacons in the first round of the 2009 NCAA Men’s Basketball Tournament in Miami, Florida before falling to 12th seeded Arizona in the second round.

Cole would turn all of that success with the Vikings into a great career in the NBA. Cole was a first round pick of the Chicago Bulls in 2011, number 28 overall. The Bulls would trade his draft rights to the Minnesota Timberwolves who would then trade him to the Miami Heat on what was a crazy draft night. Cole spent three and a half seasons in Miami before being traded to New Orleans as part of a three team deal that included the Phoenix Suns at last year’s NBA trade deadline.

Cole’s New Orleans Pelicans teammates took in the ceremony. Cleveland Cavaliers forward LeBron James was also in attendance for the ceremony. James and Cole were teammates and won two NBA championships together as members of the Miami Heat. Cole thanked everyone in attendance and all of his fans via his twitter account for such a wonderful ceremony and a tremendous honor.

At halftime of the men’s game, Cleveland State retired the jersey of Kailey Klein, the school’s all time leading scorer who led the Vikings women’s team to the NCAA Tournament twice, in 2009 and 2010. Klein’s number 23 is the first jersey to be retired by the Vikings women’s basketball program.

CSU Vikings Fall on Cole and Kailey Jersey Retirement Day 67-57 to Oakland
Cavs Get Back on Track; Stay Aggressive in 99-84 Win Over New Orleans