Cavs Get Back on Track; Stay Aggressive in 99-84 Win Over New Orleans 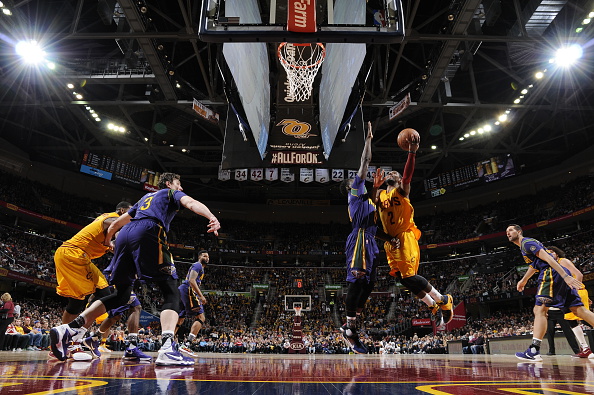 CLEVELAND – The Cleveland Cavaliers (35-14) tried to rebound after a heartbreaking last second loss to the Boston Celtics last night against the New Orleans Pelicans (18-31).

The storyline started to be dominated by the big men. Timofey Mozgov dominated for all the wrong reasons early on. He got beat easily by Anthony Davis and also had a turnover and an easy miss early. He was pulled after playing just a little over four minutes and did not return the rest of the quarter.

Davis stole the headlines early for the Pelicans. The Cavs seemed to have no answer for him, as he scored the first six for New Orleans and controlled the inside.

The Cavs were helped out by JR Smith who started out three of three from deep. Tristan Thompson also had a good first half. He held his own against Anthony Davis on the boards, grabbing six of his eleven first half rebounds on offense.

The second quarter was dominated by Kyrie Irving. Kyrie went five of eight in the quarter for 14 points to bring his total to nineteen at the half.

However, the Cavs interior defense struggled against the Pelicans big men. Davis and Omer Asik had several easy baskets down low and some of their other teammates also had easy blow byes of Anderson Varejao and Mozgov for some easy points. If their shots weren’t inside the paint, the Pelicans struggled.

They went one for eleven from three in the first half including one that went off the side of the backboard and another that went over the rim hitting nothing on the way down. The team shot just over 40% from the field for the half and Ryan Anderson in particular struggled, going two of seven from the floor. The half ended with the Cavs holding onto a 54-43 lead.

The third quarter woes for the Cavs continued to full effect tonight. The Cavs were outscored 27-20 and most of that came from poor shot selection.

The Cavs elected to live and die by the three. The team took 16 of its 24 shots from deep, only connecting on four of them for 25%. That number of threes matched their total attempted from the entire first half.

Norris Cole was the man of the quarter. The former Viking had his number retired at the Wolstein earlier today and came out with twelve early points in the quarter. The Pelicans did what they had to in order to chip into the Cavs lead by continuing to control the inside with Davis.

The fourth quarter began to set its stage after about three minutes when the Cavs started to attack the basket. LeBron made some post up moves, Kyrie was aggressive in getting to the basket and the team saw themselves up twelve with New Orleans taking a timeout to try and stop the run.

Desperate, New Orleans struggled to shoot the ball in the quarter and the Cavs defense was also much improved, holding the Pelicans to 14 points in the 4th.

In the end, although it wasn’t a great performance for Cleveland, they found a way to get the job done. Kyrie led the team with 29, followed by LeBron and JR with 27 and 20 respectively. While Tristan didn’t contribute any points, he did lead the team with 15 rebounds. With two games left before the break, the Cavs will host the Sacramento Kings (21-29) on Monday and the Los Angeles Lakers (11-41) on Wednesday.