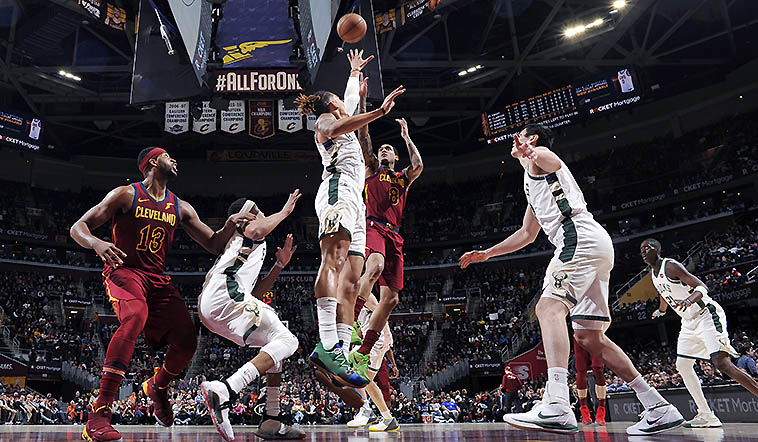 In modern era basketball, the Cleveland Cavaliers came as close as it gets to establishing a dynasty between 2014-15 and 2017-18. The team roster was packed with an abundance of talented players, boasting impressive depth across the rotations available for the two successive head coaches. Undoubtedly, the two leading stars of the show for the Cavs were Kyrie Irving and LeBron James, with both integral towards driving the team forward.

This was a Cavaliers era that was disruptive and even dysfunctional in many respects, built entirely around LeBron James as the star of the show, featuring everyone else as part of the supporting cast. There was drama and entertainment as the Cleveland franchise reached the cusp of greatness, in what almost seems like a distant memory now. But the Cavs do appear to be fighting their way back following three years in the doldrums. Let’s take a look at the journey to where we are now.

Within touching distance of a dynasty

David Blatt was head coach when this period of challenging for success commenced, leading the team to the 2014-15 NBA Finals. The Cavs would eventually fall short against the Golden State Warriors, although an exciting rivalry between these two great sides was born, as they battled for NBA supremacy over the next several years.

However, midway through the 2015-16 campaign, a disconnect with LeBron James forced the Cleveland Cavaliers to fired David Blatt and promoted Tyronn Lue. The former had never seen eye-to-eye with James, who regularly called his own plays, while Lue had also become one of the most active and engaged assistants in the NBA. When he stepped up to the top job and without the previous friction it was Lue who led the Cavs to the NBA championship, getting revenge over the Warriors with a spectacular 4-1 series triumph in the NBA Finals

The Cavaliers-Warriors clash of titans continued to thrill basketball fans, although it was the Golden State team of Steve Kerr who ultimately emerged victorious. Cleveland had continued to impress during the 2016-17 but were unable to defend their NBA crown, as the Warriors and their “Hamptons Five” imposed their authority in the NBA Finals.

Ahead of the 2017-18 season the departure of Kyrie Irving dealt a huge blow, yet Lua and the LeBron show still managed another run to the NBA Finals, only to be defeated again by the Warriors. In the end this had been a great era for the franchise, one that fans will cherish and remember for the rest of their lives, although it would eventually all come tumbling down.

Having lost reached four consecutive NBA Finals, winning one and losing three against the Warriors, the championship challenging era drew to a close ahead of the 2018-19 season. LeBron James ended his second spell with the Cleveland franchise, departing for the Los Angeles Lakers and leaving the Cavaliers without a solid identity. After a losing 0-6 start to the campaign, Tyronn Lue was fired, although the team fared little better under Larry Drew.

The Cavs finished the 2018-19 season at 19-63, registering the third worst record in the entire league, worst in the Eastern Conference, and the worst campaign for the franchise since 2010-11. Inevitably, and as everything continued to fall apart, Larry Drew ended up being fired in April 2019. Vastly experienced and highly respected college basketball coach was appointed, ahead of the 2019-20 season, yet his tenure was just as disastrous.

Players loathed the college environment Beilein brought with him, and by February 2020 he resigned after a dismal 14-40 start, much to the relief of practically the entire Cavs roster. John-Blair Bickerstaff stepped up as head coach for the remainder of the 2019-20 season, as the Cavs failed to reach the NBA Playoffs for the second consecutive season.

Throughout this period of decline for the team, GM Koby Altman had traded away disgruntled stars and attempted to rebuild, finding his most successful transactions via notable drafts. These draftees included Collin Sexton, Darius Garland, and Isaac Okoro, although the 2020-21 season fared little better and for the third year in a row, the Cavs were nowhere near making the NBA Playoffs.

Back in business with Bickerstaff

Heading into the 2021-22 season, few of the leading bookies were giving the Cleveland Cavaliers much thought. They were tipped for another year of disappointment, their capacity to reach the NBA Playoffs widely doubted, which gives credence to why finding the best betting sites is a personal choice, largely based on different criteria. Some offer better odds for our favorite sports, while others provide more markets and options. In all cases, checking site reviews makes good sense, in order to find what suits our own preferences.

Regardless of what the bookies initially believed, here we are midway through the 2021-22 season and with Bickerstaff at the helm, this Cavs team is enjoying a positive campaign. More wins than losses are always a good sign of progress, based around a core group of youthful players with lots of potential to succeed, playing team ball instead of relying on one or two superstars. This franchise may be some way from seriously challenging for the NBA championship, yet there’s always the hope when a team can reach the NBA Playoffs, which the Cavs look set to achieve this season.

The Legacy Of D’Ernest Johnson, A True Underdog Story
Garland and Mobley Lead Cavs In Comeback Win Over Thunder