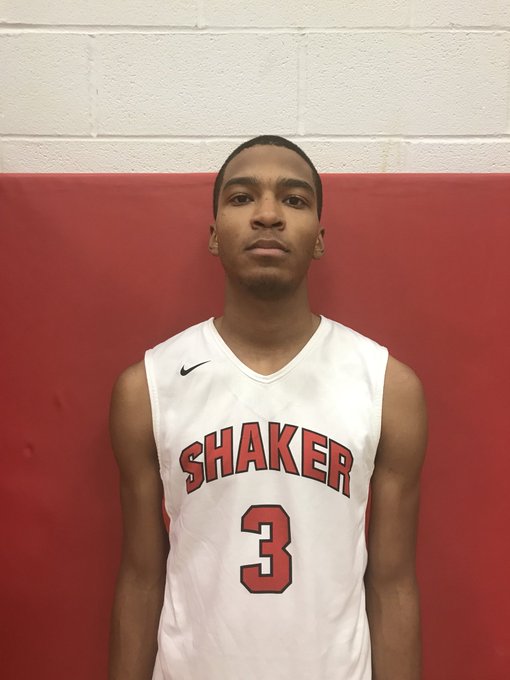 SHAKER HEIGHTS, OHIO – Shaker Heights senior forward Christian Guess is a dominating force whenever he steps on the basketball court. He proved it once again on Friday night, putting together another brilliant performance by scoring 36 points to lead Shaker Heights to wire-to-wire victory over Euclid, 79-66.

“We lost a tough one against Garfield but we didn’t let it discourage us. We came back and responded. That’s what you’re supposed to do.” said Guess.

Guess started the game with a three pointer off the opening tip, and kept going from there. He also had four rim-rattling dunks, each bringing the Shaker Heights crowd to their feet.

“I feed off of my teammates and my coaches. They get me going. Once my community gets into it, it gets going a little bit more.”

Shaker Heights head coach Danny Young also praised his team for bouncing back from their tough loss two nights ago.

“I’m proud they bounced back. The guys showed resolve and conditioning. We had some good energy and tenacity. As a coach, you’re always trying to find things you can improve upon. We’re gonna keep trying to get better defensively, sharing the ball, rebounding, and just playing the right way.” said Young.

Not to be overlooked, Fairmont State commit Dale Bonner added 18 points to contribute to the winning effort.

“They’re very good. They’re one of the best teams in the area. I think that if they beat Garfield Heights, they’re #1 at the end of the week.” said Euclid head coach TJ Kwasniak.

Despite never leading the entire game, Euclid fought until the end, cutting the deficit to single digits with 1:26 left. Senior guard Will Sanders led the Panthers with 21 points, and junior forward Octavious Hardy added 16.

“It doesn’t get any easier from here. We played Garfield Heights, Solon, and Shaker, three of the toughest teams in the state. Our goal was to take at least one of them but that didn’t happen. Hopefully we can get there. We have to gain respectability first.” he added.

“They’re a very good team. They had the crowd in the game and played with more intensity than us. We just gotta get back in the lab and do better.” said Sanders.

Shaker Heights improves to 4-1 (3-0 Greater Cleveland Conference) and takes on Cleveland Heights on Wednesday, December 27, in the NEO Elite Showcase at Garfield Heights.

Euclid falls to 2-4 (1-2 Greater Cleveland Conference) and takes on Warrensville Heights on Thursday, December 28, in the same showcase.

Rocky River Defeats Hudson 3-0 In A Friday Night Clash!
Wadsworth Too Much for North Royalton in 73-52 Win for the Grizzlies