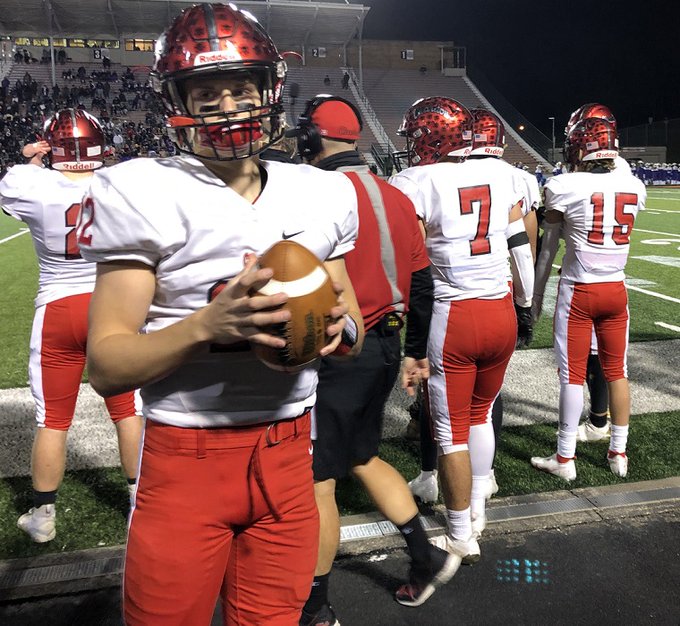 MASSILLON, OHIO – The Chardon Hilltoppers football team is nothing if they’re not resilient. Because of that resiliency and a lot of toughness, they are also Division III State Champions.

Chardon has been accustomed to getting off to a hot start on the gridiron in 2020. On Saturday night it was their opponent that got heated quickly. On the second play from scrimmage, DeSales Running Back Quintell Quinn took the ball 75 yards for the score to give the Stallions a quick 7-0 advantage.

The Hilltoppers would gather themselves after the rough start.

After DeSales Kicker JJ Baughman missed on a 42-yard field goal attempt Chardon finally got their offense going as Quarterback Drew Fetchik picked up 41 yards on a keeper on the first play of the drive to the Stallions 34-yard line. Fetchik would finish off the 75-yard drive with a plunge from one yard out. Kicker Nathan Tager tied the score at 7 with the extra point.

After the two teams exchanged punts in the second quarter Quinn would finish off a 52-yard drive with a 15-yard touchdown run to put the Stallions up 14-7 with under a minute to go.

Chardon looked to have immediately answered with a Blake Barker touchdown return on the ensuing kickoff but it was called back due to a holding penalty.

The first half would end with Chardon looking at a 14-7 deficit.

The Hilltoppers wasted no time getting to business in the second half as Fetchik hit Barker on a screen pass in the flat on the left side. Barker took it 63 yards for the score. After the Tager extra point the score was tied at 14.

Chardon appeared to take over the momentum, forcing the Stallions into a 3 and out on their next possession. However, a trick play calling for a pass from Running Back James Pettyjohn would result in a turnover as the pass came up a little short on the sideline and Defensive Back Nicky Pentello came down with the ball for DeSales.

The Stallions would make it hurt right away as Quinn would take the ball 60 yards up the middle for the score to put DeSales up 21-14.

After Chardon failed to convert on a 4th and 8 with 5:04 left in the third quarter, DeSales ripped off a 61-yard drive that was highlighted by 32 and 31 yard catches by Receiver Jordan Johnson, the latter catch going for a score to put the Stallions up 28-14 with 2:07 to go in the quarter.

Chardon would drive to the DeSales 14-yard line and on a 4th and goal it appeared that the Hilltoppers had pulled off a little trickery to get into the end zone.

Fetchik rolled to his right, hit Myles Mendeszoon at the four-yard line, who then pitched the ball back to Evan Ash on the hook-and-ladder play. The play worked to perfection except for one tiny detail. Mendeszoon’s knee just grazed the turf as he caught the pass from Fetchik. Replay would negate the result and the Stallions would have the ball and all the momentum.

Chardon’s defense would come up huge yet again, forcing another 3 and out and giving Fetchik and the offense great field position at the DeSales 36.

Fetchik and crew immediately took advantage as he found Barker again, this time on a wheel route that went 36 yards for the score to bring the Hilltoppers back to within a single possession at 28-21.

After yet another stalled drive and punt by DeSales, Chardon would take over at their own 9 with 4:17 a 91 yards to go to tie the game.

On 2nd-and-9 Fetchik completed a pass to Brady Toth for a 46-yard gain. On the very next play, with DeSales still reeling, Fetchick this time found Alex McDonald for a 34-yard gain down the sideline to the Stallions 10-yard line. Fetchik would get to the 1 on a keeper, where Evan Ash would finish the drive with a touchdown plunge. After the extra point Chardon had tied the game at 28.

DeSales Quarterback Whit Hobgood was picked off by Cade McDevitt on the first play of the drive and the Hilltoppers looked to be in business. They were unable to get anything going, however, and a 49-yard field goal attempt would miss wide left.

Regulation would end with the score still tied at 28 and the Division III State Final would head to overtime.

Chardon won the toss and elected to start out on defense.

DeSales suddenly was unable to find running room against the Hilltoppers defense and they would attempt a field goal on a 4th and goal at the Chardon 7. Trey Liebhardt came hard off the corner and laid out to block the kick and Chardon would have the ball at the DeSales 20 with a chance to clinch the title.

DeSales’ defense held as well, however, and they were able to get a hand on a Chardon field goal attempt from 35 yards out to force a second overtime.

Chardon would have the ball first in the second overtime. After a 12-yard keeper by Fetchik set up a 1st and goal at the 7-yard line, the DeSales defense would stiffen up and turn the Hilltoppers away once again.

This time, however, the field goal attempt by Tager sailed through the uprights giving Chardon their first lead of the game at 31-28.

DeSales would have one last shot. The Chardon defense, which has been an obvious strength all season, held tight and allowed no running room for the Stallions and Quinn as they forced them into a 3rd and 10 from the 20.

After an incomplete pass, it was 4th and 10 and DeSales would attempt a 37-yard field goal to tie the game and force a third overtime. It missed wide left, however, and the Hilltoppers were state champions, clinching the school’s first state football title since 1994.

Quarterback Drew Fetchik led the way, going 10 of 16 for 244 yards and two touchdowns, both of those going to Barker. Fetchik also had 82 yards on the ground on 18 carries for the Hilltoppers. Barker had 3 catches for 94 yards, including his two scores.

For DeSales, it was the Quintell Quinn show. He had 218 yards on 28 carries for 3 scores. Hobgood was 11 of 19 for 180 yards through the air. He threw one touchdown and was intercepted once.

Hilltoppers end their dominating season at 12-0 and are Division III State Champions. They outscored their opponents 507 – 109 on the season and were only really tested by DeSales in the title game. The championship is Mitch Hewitt’s first title as a head coach.