Cavs Shut Down Celtics in Second Half; Win 89-77 In Love’s Return to Boston 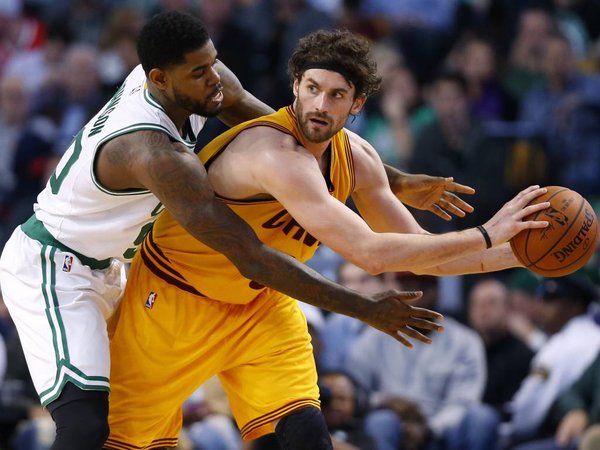 The Cavaliers faced off with the Boston Celtics Tuesday night for the first time since game four of the first round of the 2015 Eastern Conference Playoffs.

It was a tale of two halves, as the Cavs struggled in the first half, but turned it on after halftime and would cruise to an 89-77 victory to improve to 16-7 on the season.

The last time the two teams met, power forward Kevin Love injured his shoulder, fighting for position with Kelly Olynyk and would not suit up for the rest of the postseason.

Love made his presence felt early in his return to Boston, scoring 11 points in the first quarter, in which both teams traded buckets back and forth, and the Celtics held a 25-23 lead at the end of one period.

Boston maintained the lead throughout the second quarter, receiving balanced scoring from Avery Bradley and David Lee, who each scored eight points in the first half, Isaiah Thomas, who scored 10, and Jae Crowder led the team with 11 points at halftime. Those four players accounted for 37 of the Celtics’ 46 points in the half.

LeBron James led all scoring with 14 in the half, but the Cavs trailed 46-40 at the break.

LeBron and Love carried the team most of the way midway through the third quarter, as they sparked a 12-0 run to lead 57-50, in which the duo combined for nine points and J.R. Smith hit a three. LeBron slammed home a two-handed reverse dunk to put an exclamation point on the run.

The Cavs’ ball movement was on display in the third quarter, as Mo Williams knocked down a wide open three off a great feed from Love to make it a nine-point game with three and a half minutes left in the quarter.

Bradley connected from beyond the arc with just over two minutes left in the quarter to get the Celtics’ crowd back in the game and make it a five-point deficit.

Richard Jefferson knocked down his first three of the night with about a minute left in the third quarter to put the Cavs up 67-57.

Boston would put up a quick four points late in the quarter, but Williams went coast to coast in just four seconds to hit a layup at the buzzer and give the Cavs a 69-61 lead heading into the fourth quarter.

The Cavs outscored Boston 29-15 in the third.

Cleveland stayed hot to start the fourth quarter, going on a 10-5 run to start the quarter and expand their lead to 13 with 9:20 to play, as Iman Shumpert hit two quick shots from deep.

Shumpert, who was playing in just his second game of the season, coming back from a wrist injury, exited the game with eight minutes remaining, to be checked out in the locker room with a groin injury. He would not return to action the rest of the game.

Crowder hit his fourth trey of the night to get the Celtics back within single digits with about seven minutes to play.

Evan Turner would make it a seven-point game, but Love answered back with a beautiful spin move for a layup and then drained a three on the next possession to put the Cavs up 84-72 with 5:12 on the clock.

LeBron made it a 14-point game on the next possession with a turn around fade away shot down low. Love would split a pair of free throws to put the Cavs ahead by 15 with four minutes left.

Bradley hit a jumper to make it a 13-point game, and the Celtics employed the “Hack-A-Tristan” strategy with 2:40 remaining, so Head Coach David Blatt took Tristan Thompson out of the game.

Love’s return to the building where his postseason ended abruptly was one of his best performances of late, as the power forward put up 20 points, eight rebounds, five assists, and blocked two shots.

After the game, Love was asked what emotions he was feeling in his return to Boston and said, “I’m not holding any grudges, life is too short, we just knew we had to get a tough win here ’cause they’re a very good team.”

LeBron had an effective night, per usual, leading all scorers with 24 points on 10 of 20 shooting, and also came up with seven rebounds.

Cavs’ center Timofey Mozgov was just shy of a double-double, putting up nine points and ten rebounds, and Thompson contributed nine rebounds off the bench.

The two backcourt scorers, Williams and Smith had solid nights, as well, as Smith put up nine points and Williams contributed ten.

The Celtics were held to just 32 percent shooting on the night, but the Cavs locked them down to shoot just 26 percent after halftime. Bradley finished with a team-high 17 points, but the quartet of Bradley, Lee, Thomas, and Crowder, who scored 37 points in the first half, combined for just 14 in the second half.

The Cavs return to Cleveland to take on the Oklahoma City Thunder, Thursday night at the Q. Tip-off is scheduled for 8 PM. The Thunder currently hold the third-best record in the Western Conference (16-8), fourth-best in the NBA.