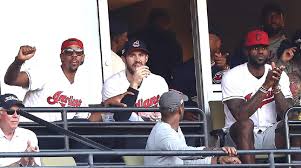 For fans worried about downtown traffic in Cleveland, have no fear.

The NBA has agreed to move the Cavaliers-Rockets to 6pm to avoid the first pitch for the World Series, which happens at 8:08. Here’s the Tweet from Jason Lloyd reporting the news:

Fans who have tickets to the Cavs game can now watch both games. The Gateway Plaza between The Q and Progressive Field will have screens to view the Indians game, so everybody will be able to watch every pitch with anticipation.

A Bad Omen? The Last Time the NFL Had Two Ties the Indians Lost the World Series in Seven Games
LeBron James named Eastern Conference Player of the Week