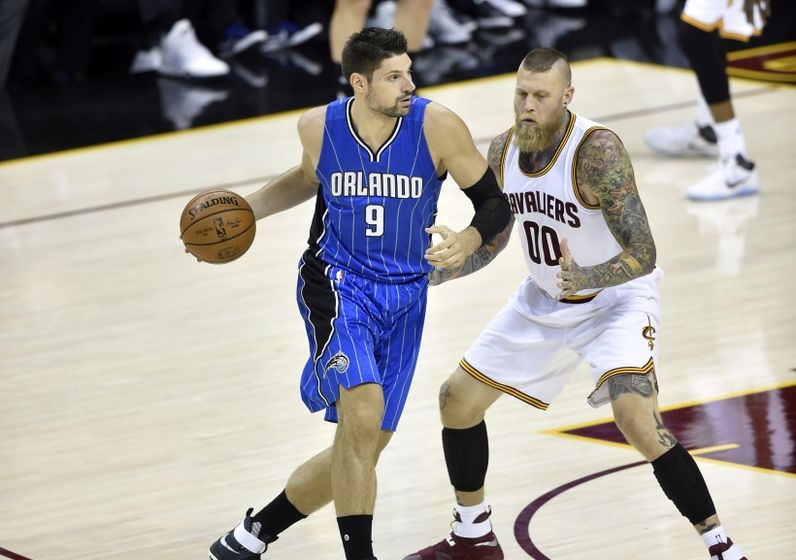 – Cavs (2-0, 1st in Central): Cleveland’s defending NBA champion Cavaliers will be heading into tonight’s match-up at Quicken Loans Arena on the tail end of a back-to-back.

The Cavaliers suddenly find themselves riding a two-game winning streak after their grind-out (94-91) victory last night over the Toronto Raptors inside The Air Canada Centre.

After holding the advantage in Friday night’s game by as many as 12 points through the first three quarters, Cleveland’s comfortable lead turned into a one-point deficit at the 2:37 mark of the fourth thanks to a 22-point second half performance from Raptors guard DeMar DeRozan.

With 44 seconds remaining in a close game, Kyrie Irving reminded everyone why he’s considered one of the best point guards in the NBA by draining a go-ahead three-pointer over Raptors guard Kyle Lowry. In the end, Irving’s shot sealed the win for Cleveland.

.@KyrieIrving drills huge trey with .44 to play, #Cavs back up, 94-91; was furious with non-call on previous trip down the floor.

Irving spoke with members of the media after Friday night’s victory, saying:

“I’m glad that we went through a close game with a great team like that tonight, though. It shows a lot of growth on our end as a team.”

– Magic (0-2, 5th in Southeast): Like Cleveland, Orlando comes into tonight’s bout on the second night of a back-to-back set.

However…unlike Cleveland, Orlando is now riding a two-game losing streak after their disappointing (108-82) loss to the Detroit Pistons inside The Palace of Auburn Hills.

Magic Head Coach Frank Vogel reflected on the loss with members the media in a post-game interview, saying:

“I thought that early on, too many guys were trying to get us into the game by themselves instead of trusting their teammates. Once it got out of hand, I think our shoulders slumped, but that’s going to happen to any team that gets outplayed that badly.”

The Magic were sorely beaten on the glass in Friday’s loss. Pistons big-man Andre Drummond made light work of Orlando’s interior defense, en route to 12 points and 20 rebounds (16 in the first half).

Orlando aquired power forward Bismack Biyombo from the Raptors in free agency with hopes of bolstering their front-court. However, due to a one-game suspension that was enforced by the NBA at the end of last season for exceeding the flagrant foul limit, Biyombo was forced to sit out of Orlando’s opening night (108-96) loss to the Miami Heat on Wednesday night.

In his long-awaited season debut with the Magic on Friday night, Biyombo tallied just two points, three rebounds, and one block in 23 minutes of playing time.

Biyombo spoke to the media with frustration and motivation after Friday’s tough loss in Detroit, saying:

“We have to start playing as a team. We’re out there playing one on one all over the court, and that’s not how you win games in this league.”