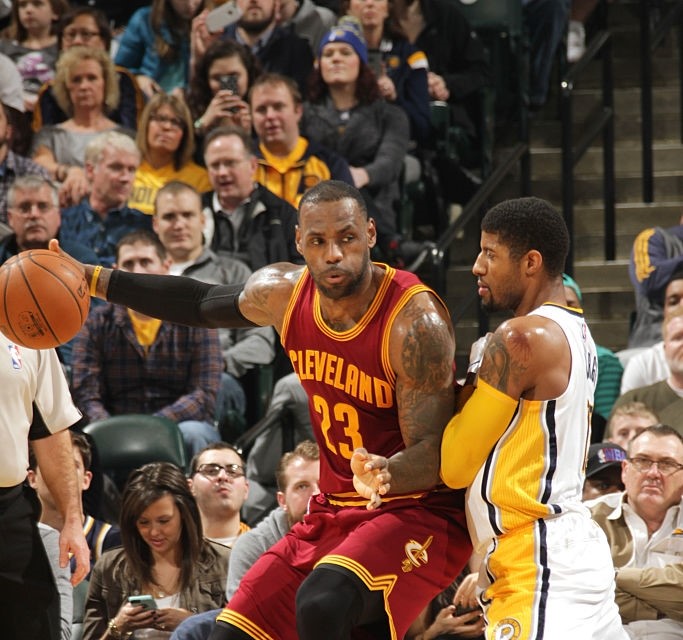 The Cavaliers travelled to Indiana to take on the Pacers at the Banker’s Life Fieldhouse, a venue that has not been kind to the Wine and Gold in recent years, having lost ten straight games there prior to Monday night.

Cleveland got out to a hot start, leading 33-26 after one quarter.

Kevin Love got going early for the Cavs, as he has in the last three games, and put up eight points in the first quarter.

The Cavs had three players in double-digit scoring at halftime, leading 60-49, as LeBron James scored 13 points in the second quarter, entering halftime with a game-high 17 points.

The Pacers absolutely owned the Cavs in the third quarter, outscoring Cleveland 30-15, and Indiana would lead 79-75 heading into the fourth.

Late in the fourth quarter, the Cavs were down 93-89 before J.R. Smith canned a clutch three-pointer with 1:58 to go.

LeBron would bank it off the glass to put the Cavs ahead with 1:16 to play, but George Hill came back and drained a three to make it 96-94 with 56.7 seconds remaining.

Kyrie Irving knocked down a clutch mid-range jumper to tie it with 44 seconds to play.

The Pacers had a chance to win the game in regulation, but Monta Ellis dribbled almost 20 seconds off the clock and heaved up a prayer that was nowhere near going in, and the game would head to overtime tied at 96.

Indiana struck first in overtime on a jumper from Myles Turner, but Love put the Cavs on top 99-98 with a three.

The two sides went back and forth for the next three minutes, and Irving hit two clutch free throws with 43.7 seconds left in OT, to make it 103-100 in favor of Cleveland.

Ellis drove to the hoop, drawing a foul, and would hit both free throws to make it one point game with 40.8 seconds to play.

Irving missed a wide open three, but LeBron grabbed a huge offensive rebound, dished it back to Irving, and Indiana was forced to intentionally foul.

LeBron locked down Paul George, who dished it to Hill, who threw up a difficult jumper and missed, and the Cavs would hold on to win 111-106, as LeBron knocked down two big free throws to close it out.

Kyrie ended up with 25 points and seven assists. 15 of Irving’s points came after the third quarter.

George had an awful shooting night for the Pacers, going 3-for-15 from the field. He would finish with 11 points, five rebounds, eight assists, and turned it over five times.

Hill led the Pacers in scoring with 23 points.

The Cavs improve to 35-12 with the win, extending their win-streak to five games, and are now 5-1 under Head Coach Tyronn Lue.

Cleveland travels to Charlotte to take on the Hornets Wednesday night. Tip-off is scheduled for 7:30 PM.