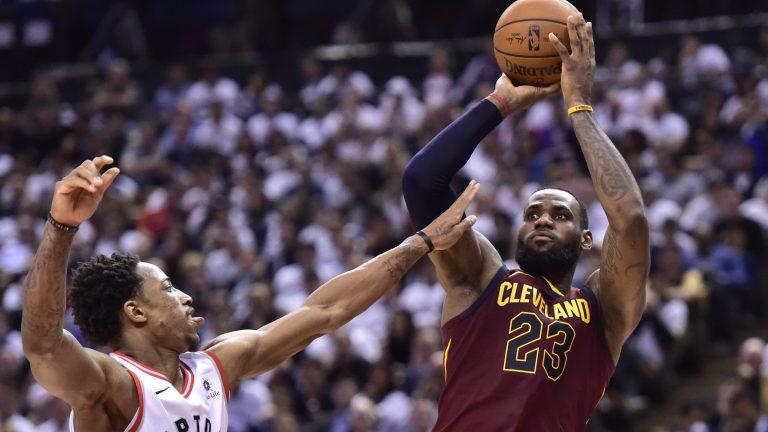 The Cleveland Cavaliers went into Toronto with a mission to take at least one of the first two games north of the border. Well, the mission was accomplished times two.

Cleveland handled the Raptors by a final score of 128-110 on Thursday night. LeBron James led all scorers with 43 points and Kevin Love returned to All-Star form with 31 points.

A strong second half blew the game open for Cleveland and Toronto would never recover. DeMar DeRozan and Kyle Lowry combined for 45 points, barely eclipsing James’ point total. The bench didn’t add a ton either to help the cause, leading to the Game 2 defeat.

Let’s take a look at the three takeaways from the Cavs’ Game 2 win.

1. The Grim Reaper- LeBron James has to be the last guy any Raptors fan ever wants to see. In fact, the whole city of Toronto seems to lose their composure when The King is in their city.

After an “off-night” In Game 1, James went bonkers on the Raptors and had a ton of fun in the process. LeBron appeared to be relaxed in a way, toying with defenders throughout the contest.

It’s safe to say this is the most comfortable he has looked this postseason. After battling a tough Pacers team last round, seeing his old friends in Canada seems to have been the perfect remedy for the team to give him some support on the court.

2. Love Is Back- For the beginning of this postseason run, many were wondering what had happened with Kevin Love. The Cavs power forward had seen his role upgraded to the second option this season and the same would apply to the playoffs. But Love hadn’t been able to get it going through eight total games and it was hard to miss the fact that something appeared out of sync with his game.

Love was able to prove he’s the best big man on the floor in this series. He not only dropped 31 points but also secured 11 rebounds. He created a mismatch with Jonas Valanciunas in the inside-out game and as the three-ball started falling, it gave Toronto a further glimpse of their future in this series.

When Love’s on, the Cavs are scary. Nothing has changed that fact.

3. Raptors Bench Adding No Production- It was heralded all season long but when the real season began, the Toronto bench has been nowhere to be found.

Toronto’s bench combined for 43 points, which really does nothing when LeBron and Love tally 74 themselves. Fred VanVleet is the only second unit player adding solid production but he’s being expected to add quality in big minutes. It’s just not working for Toronto, no matter what they try.

Video: All LeBron All the Time; Watch as James Puts Up 43 in Cavs Win Over Raptors
Key dates that remain in the Browns offseason