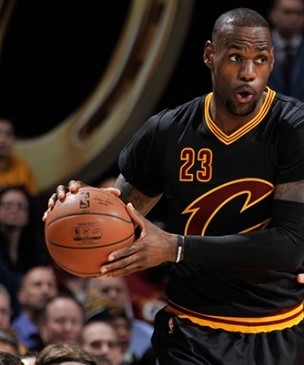 The Cleveland Cavaliers returned to action after a week-long All-Star Break and welcomed the Chicago Bulls to town for a Thursday night showdown.

The Cavs started off the unofficial second half strong, in a game that was never really in doubt, as Cleveland rolled through Chicago 106-95.

The Bulls won the first two meetings vs Cleveland this season, but were without star shooting guard Jimmy Butler in Thursday’s matchup.

The Cavs got out to a nice start, leading 13-7 in the first five minutes, but Chicago rattled off a quick 5-0 run.

It was back and forth for the next few minutes, but the Cavs ended the quarter strong, leading 26-19 heading into the second.

LeBron James and Derrick Rose each led their teams with eight points in the quarter.

Rose turned back the clock with a vintage layup and finish for the and-one midway through the quarter.

Cleveland played well on both sides of the court to start the second quarter, going on a 17-6 run in the first eight minutes to jump out to a 17-point lead.

Chicago climbed back in the final four minutes of the half, cutting it down to a six-point game, as the Cavs would lead 48-42 at halftime.

Rose carried the Bulls, leading all scoring with 18 points in the first half.

Tristan Thompson had a big second quarter, scoring eight points, and would lead the Cavs with 12 points at halftime. He also grabbed eight rebounds in the half.

Love scored eight points and hauled in 11 rebounds in the first half, making it clear that his shoulder did not bother him from a week ago when he exited the game against the Lakers.

LeBron put up 10 points while dishing out five assists in the half.

The Cavs went on a nice run to start the second half, but J.R. Smith and Taj Gibson got into a dust-up with 9:47 to play in the third quarter, resulting in a double-technical. No punches were thrown, just a couple hard shoves each way.

The crowd was amped up after that and the Cavs seemed to feed off of the energy, jumping out to a 17-point lead in the first four minutes of the half.

The game was noticeably more physical in the third quarter, as the Cavs matched the Bulls’ style, not allowing Chicago to bully them like they did in the January 23rd meeting.

LeBron scored nine points in the quarter and the Cavs would lead 78-64.

The Cavs would maintain control in the fourth quarter and beat Chicago for the first time in the 2015-2016 season with a 106-95 victory.

Kyrie Irving had a big second half after scoring only six points in the first half, finishing the night with 19 points. 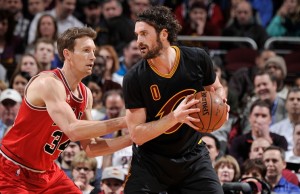 The Cavs’ frontcourt trio of Love, Thompson, and Timofey Mozgov had a great all-around night. It’s not uncommon for one or two of these players to have big games, particularly the combo of Thompson and Love, but Mozgov had a productive night after enduring weeks of trade rumors and speculation. The Russian contributed 11 points, seven rebounds, and blocked four shots off the bench.

Love ended up with 15 points and 15 rebounds. Thompson put up 16 points with ten rebounds. The trio of Love, Tristan and Timo combined for 32 rebounds.

Rose had one of his better scoring nights of the season in Butler’s absence, finishing with 28 points, just six shy of his season-high. He is averaging 16 points on the season.

The next stop for the Cavs is a Sunday marquee matchup on the road versus the Oklahoma City Thunder. The Thunder are arguably a top-four team in the NBA and a win on the road would make a big statement for the Cavs, who will be looking for the 40th victory of the season.

Cavs Pay Homage to Anderson Varejao After Dealing Him to Portland
Could Joe Johnson be Cavs’ Next Target?