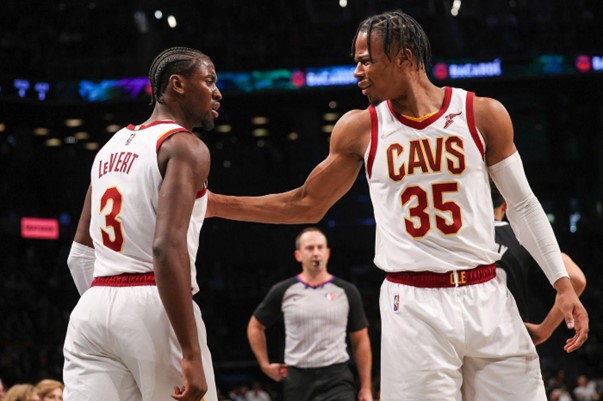 The Cleveland Cavaliers have officially started their training camp at Cleveland Clinic Courts. As what should be an exciting season for the Cavs. Newly acquired Donavan Mitchell will be the highlight as he makes his Cavs debut. Of course, you also can not forget about the other stars in Darius Garland, Evan Mobley, and Jarrett Allen. But what may be the most interesting thing to watch in training camp is who will start at the small forward position.

After last year’s starting small forward Lauri Markkanen left in the Donavan Mitchell trade, the Cavs have a starting spot to fill. That spot could be filled by quite a few players. Such as Isaac Okoro, Caris LeVert, Dean Wade, Dylan Windler, and you can never rule out Lamar Stevens or Cedi Osman either.

The Cavs have a problem on their hands, but not in a bad way. This also just shows how much depth that Cleveland has now. Something they have not had much of in recent years.

Isaac Okoro enters his third year in the league, but with his size some people may view him as a guard. But he makes up for it with his defense. He can guard anyone in the 1-4 position much like Lamar Stevens. Which is why you can make a case for either of them to start.

While guys like Caris Levert and Dylan Windler could fit well because of their shooting and the way they would help space the floor.

But you cannot forget how the Cavs went with the big man starting lineup with Markkanen last season. If they wanted to go down that same route, that is where you must look at guys like Dean Wade and Kevin Love as a possible option as the starting small forward.

One last option could also be Jae Crowder. Yes, you heard that right. According to reports, the Cavaliers are formerly interested in reuniting with the former Cav. It may or may not be a good idea. Considering his drama the first time he was here. However, it is a name that is out there right there for the Cavs.

Either way, it will be very interesting to watch all of these guys as training camp continues and see if any of them can start to pull away with the starting spot. The Cavs open the preseason on Wednesday October 5 in Philadelphia.