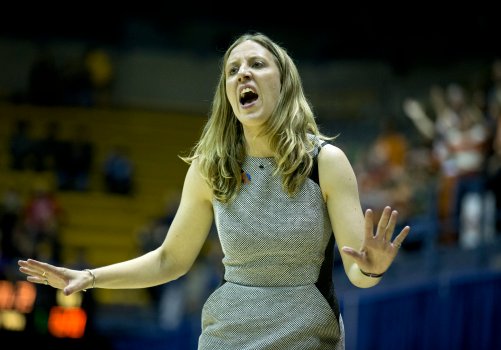 General Manager Koby Altman spoke of the hire via a press release by the Cavs.

“Lindsay Gottlieb will be a great addition to Coach Beilein’s and Coach Bickerstaff’s group. She has an extensive track record of success and growth with her teams and players and has also been a strong culture-driver as a core part of that,” said Altman.

“The more we researched and got to know Lindsay, the more we came to understand that she would be an impactful part of where we want to go as a team. Coach Gottlieb brings a depth of basketball knowledge, leadership, perspective and approach to her craft that will fit very well with our team and staff alike.

“We’re fortunate that she was willing to leave her role as Head Coach at such a solid and successful program at Cal.”

It’s also a history making hire as Gottlieb is the first women’s collegiate head coach recruited to an NBA staff.

Gottlieb brings a strong resume, as she led the Golden Bears to a Final Four appearance and also seven NCAA tournament births.

“I am excited to have a coach with Lindsay’s experience as a part of the new coaching staff with the Cavaliers,” said Beilein.

“Lindsay truly values and embraces player development and a culture of winning basketball habits. Her success at Cal Berkeley speaks for itself and her insight in our meetings, practices and games will hold tremendous value.

“After sitting with her, it was easy to see how she will connect quickly with our staff and our players, and we all benefit because of that connection. I’m looking forward to merging all of her years of experience and vision for the game with our current and future coaching staff.”

ESPN reports that the 41-year-old will ink a four-year deal with the Cavs, and will ‘play a prominent role in support of Beilein and associate head coach JB Bickerstaff.’

“I am very thankful, proud and excited to be joining the Cavaliers as an Assistant Coach. After meeting with Koby Altman, Coach Beilein and Coach Bickerstaff, I knew this was an organization I wanted to be a part of and a team I wanted to dedicate myself to,” said Gottlieb.

“While this move provided a unique and special chance to move directly from Cal Berkeley and women’s college basketball to the NBA, it was really about being part of building and growing something special and adding value to a team and organization that is focused on doing things in a way that I believe strongly in.”

Fans Don’t Like the Dolans Like Other Cleveland Sports Owners – There’s Some Good Reasons Why
Jarrett Culver, a Brandon Roy replica, should be Cavs’ selection in the 2019 NBA Draft