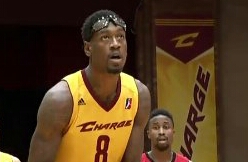 The Canton Charge pulled out a close game against the Windy City Bulls on Saturday night. In the Charge’s final home game of the regular season, a sellout crowd came to watch the surging Charge and Larry Sanders’ debut with the team.

The Canton Charge beat the Windy City Bulls 104-101 in Larry Sanders’ debut. It was the Charge’s final home game of the season and a sellout crowd was in attendance for the Charge’s Fan Appreciation night.

It was obvious at the start that the Canton Charge were playing with a lead guard they weren’t familiar with running the show at the start, as Kay Felder and Quinn Cook both received call-ups before the game. Felder was recalled by the Cleveland Cavaliers this morning according to a press release from the NBA. According to ESPN’s Marc Stein, Cook is signing a 10-day contract with the New Orleans Pelicans.

Jordon Crawford (not to be confused with Jordan Crawford) ran the show for the Charge instead. Crawford was acquired by the Canton Charge in a mid-February trade with the Westchester Knicks.

After a slow start in which the Charge couldn’t buy a bucket and were turning the ball over more times than they were converting field goal attempts, the Charge finally were able to go on a run behind the defense of Eric Moreland and the transition offense of John Holland. After hitting a stride and building a comfortable lead, Sanders was on the sidelines ready to check in at the end of the first.

He didn’t get the chance to check in until the start of the second quarter and when he did, all eyes were on him.

Sanders’ first game back was awfully reminiscent of Moreland’s first game, as he looked unable to get to the spots he wanted to be at on the floor and was missing field goals attempts. Like Moreland, Sanders is clearly going to need time to get back into the flow of the game. He was reading the plays right though and that’s the most important part at the genesis of his journey back to being a productive NBA player.

Defensively, the Charge often had problems keeping the Bulls from scoring inside as the Bulls worked the ball around found their frontcourt duo of Alec Brown and Duje Dukan inside and behind the line. Brown and Dukan combined for 42 points and had 10 combined threes.

For the Charge, Jones, Holland and Mike Williams combined for 49 points and were generally able to make shots both around the rim and in the midrange when they were unable to get all the way to the rim. Moreland, an NBADL All-Star this season, only had 8 points, failing to be aggressive offensively and he had 7 turnovers to boot as he struggled to catch the entry passes from the new lead guards for the Charge. However, he 20 rebounds, 3 steals and 5 blocked shots while anchoring the Charge’s defense for 36 minutes.

Holmes had a quiet 18 points and 10 rebounds, was solid on both ends. He, like Moreland, is a designated affiliate player for the Cleveland Cavaliers.

The Charge’s next game will be March 23rd against the Maine Red Claws (7 PM EST). The NBADL regular season ends on April 1st.