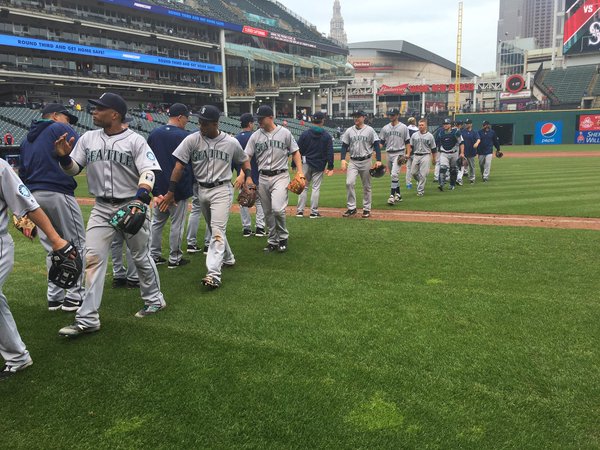 The Cleveland Indians and Seattle Mariners played the rubber match of a three-game series in a Thursday afternoon getaway game at Progressive Field.

It was a back and forth game, as Seattle jumped out to an early 5-0 lead before home runs from Rajai Davis and Mike Napoli helped the Tribe tie the game at 7 and send the game to extra innings.

Rajai started it off with a blast in the 5th—Then a 2-run 6th put us back within 2.

Heck of a time to get your first career pinch-hit dinger. #MFNhttps://t.co/g6BU0gqgaE pic.twitter.com/qzX6wNpYBv

Unfortunately for the Tribe, closer Cody Allen, who kept the game tied in the ninth, found himself in a precarious position, facing Mariners Second Baseman Robinson Cano with runners at the corners and two outs in the top of the 10th.

Cano didn’t just drive in the go-ahead run, but launched a three-run bomb to center field to make it 10-7 in favor of Seattle and ultimately win the game.

Robinson Canó in the CLUTCH.https://t.co/fNyXzHKfRq

“We’ve played pretty good baseball this year,” Allen said. “I know we are 6-7 but our offense has done a heck of a job, and we’ve gotten some big hits, and just for us to keep fighting right there it’s something that is going to pay dividends down the road.

“We’re just trying to get on a roll, trying to put some things together,” Napoli said. “First 13 games, you’d love to play better but we’re right about .500 and we just need to continue to try and get better.”

For the Tribe, it’s a disheartening loss, which makes them 6-7 on the season, but at least the offense showed they can put up big numbers.

Indians Starting Pitcher Cody Anderson struggled, allowing five earned runs on nine hits over 3.2 innings of work, but got a no-decision because his offense bounced back.

Tony Zych gets the win for the Mariners and Steve Chisek earns his third save of the season.

The Tribe heads out on a six-game road trip, which starts Friday night in Detroit. First pitch is set for 7:10 PM.