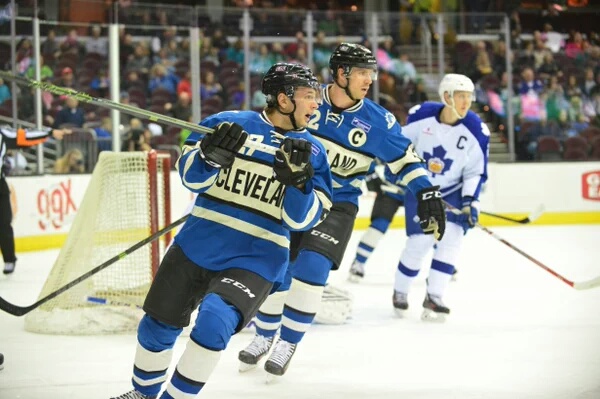 The Monsters took on the Toronto Marlies Sunday March 20 at Quicken Loans arena for a matinee game fresh off a 5-0 victory from the night before where the Monsters dished out some payback to the Manitoba Moose who had beaten them 4-0 in the Q on the 18th.

The first period went scoreless, but came with plenty of action, close calls, and heavy hitting.

As for the middle frame, the Monsters could have still been drunk with victory from the scoring clinic they displayed the night before in the first period. But the Marlies would score 3 unanswered goals from Eric Faille, Andrew Campbell, and Richard Clune. The Monsters appeared to be hung over the entire 2nd frame and m Monsters would head into the final intermission down 3-0.

In the third, the Monsters hang over would wear off a little with a goal from Lukas Sedlak, his 7th of the season, assisted by Trent Vogelhuber only a minute and eighteen seconds into the final period to bring the Monsters within 2. But an empty net goal from T.J. Brennan would ice the game in the final frame with only a second left in regulation. The Monsters would take the loss with Anton Forsberg between the pipes. Lake Erie take on The Icehogs on Thursday March 24 at the Q for a 7 PM puck drop. Go Monsters!

Monsters Rush to the Playoffs Slowed in Setback to Moose
Intermissions with Double A; Monsters Top IceHogs 4-2