By the numbers: Browns lead NFL in rushing 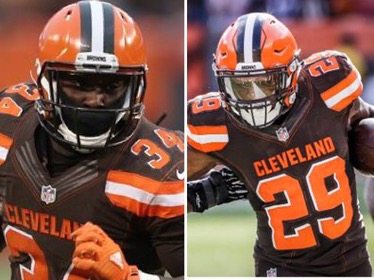 Aside from the 0-4 record, the Cleveland Browns are actually leading the league in rushing so far this year. Led by RB Isaiah Crowell, the Browns average 149.3 ypg, giving the team an identity which they have been seeking for quite a while now.

Crowell leads the team with 386 rushing yards this season which is the most by a Brown through the first four games of a season since Jim Brown in 1965. He is also the first Browns player to record at least 60 rushing yards in each of the team’s first four games since Earnest Byner in 1985. Crowell has a team-high three rushing touchdowns this season and 15 in his career.

The team is still improving and trying to get over the hump to record their first win of the season and the run game has given the Browns a fighting chance every game. Duke Johnson Jr. had a costly fumble against the Washington Redskins Sunday but was pushing the piles just as well as Crowell was while racking up 53 yards on nine touches

Injuries have plagued the team this season but if the running backs can stay healthy and consistent, they could be looking at a top five running attack not only for this year, but moving forward in years to come.