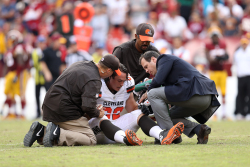 Browns center Austin Reiter will miss the remainder of the 2016 season with a torn ACL.

Reiter was signed off the Redskins’ practice squad, leading up to Sunday’s game against the Washington Redskins.

It was Reiter’s NFL debut.

The Browns will have to make yet another change to the starting center position heading into Week 5 against the New England Patriots.

The Browns QB outlook for the future
By the numbers: Browns lead NFL in rushing