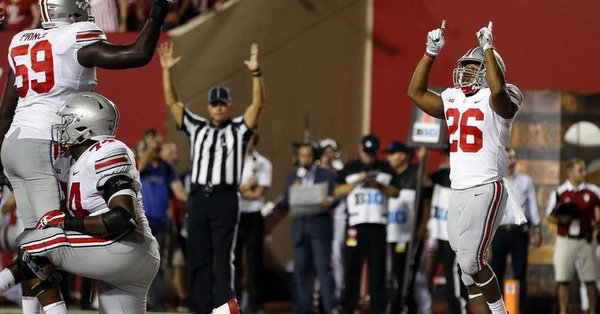 As frustrating as the first half was for Ohio State fans, the second half was what everyone expected.

The Buckeyes controlled the line of scrimmage on both sides of the ball for the final two quarters to turn what was a tight game into a comfortable 49-21 win over Indiana in Bloomington in the season opener for both teams.

In boxing a fighter will attack his opponent’s body early, hoping those shots will pay off later in the fight. Ohio State didn’t exactly pound on the Hoosiers’ offensive and defensive lines in the first half, but it did enough to wear Indiana down.

By the third quarter the writing was on the wall, and it was an offensive drive that gave the Buckeyes their first lead since the opening drive of the game that signaled how the second half would unfold.

With 11:11 left in the third quarter the Buckeyes took over at their own 15-yard line. They would march 85 yards in 13 plays, most of them runs between the tackles by freshman running back J.K. Dobbins or senior quarterback J.T. Barrett, to take the lead.

Barrett capped the drive with a 2-yard run after an Indiana pass interference penalty in the end zone.

It was clear the Hoosiers’ defense was getting tired.

Indiana would take a 21-20 lead later in the quarter, but Ohio State would score the game’s final 29 points to pull away.

In the second half Barrett rarely was touched when he dropped back to pass. When the Buckeys ran the ball, first contact usually came three to five yards down the field. At times it looked like Ohio State was the varsity team getting in some reps against the JV squad.

On the defensive side of the ball the Buckeyes defensive line turned up the heat in the second half as well. Hoosiers quarterback Richard Lagow picked the Ohio State defense apart in the first two quarters as the Buckeyes’ defensive front struggled to show him any kind of pressure.

That changed after halftime. Indiana went three-and-out the first two times it had the ball. Lagos threw a pair of second-half interceptions, had two more interceptions dropped and fumbled the ball away in the shadow of his own goalposts late in the game.

“We have a good defensive line, but they were getting (the ball) out so fast,” Meyer said after the game. “We just played better in the second half.”

Lewis ended the contest with a pair of sacks, giving him 18.5 in his career.

“We just played a very good football team,” Indiana’s first-year coach Tom Miller said. “I used to coach in the SEC, and that was the kind of team we would see every week. They are elite.