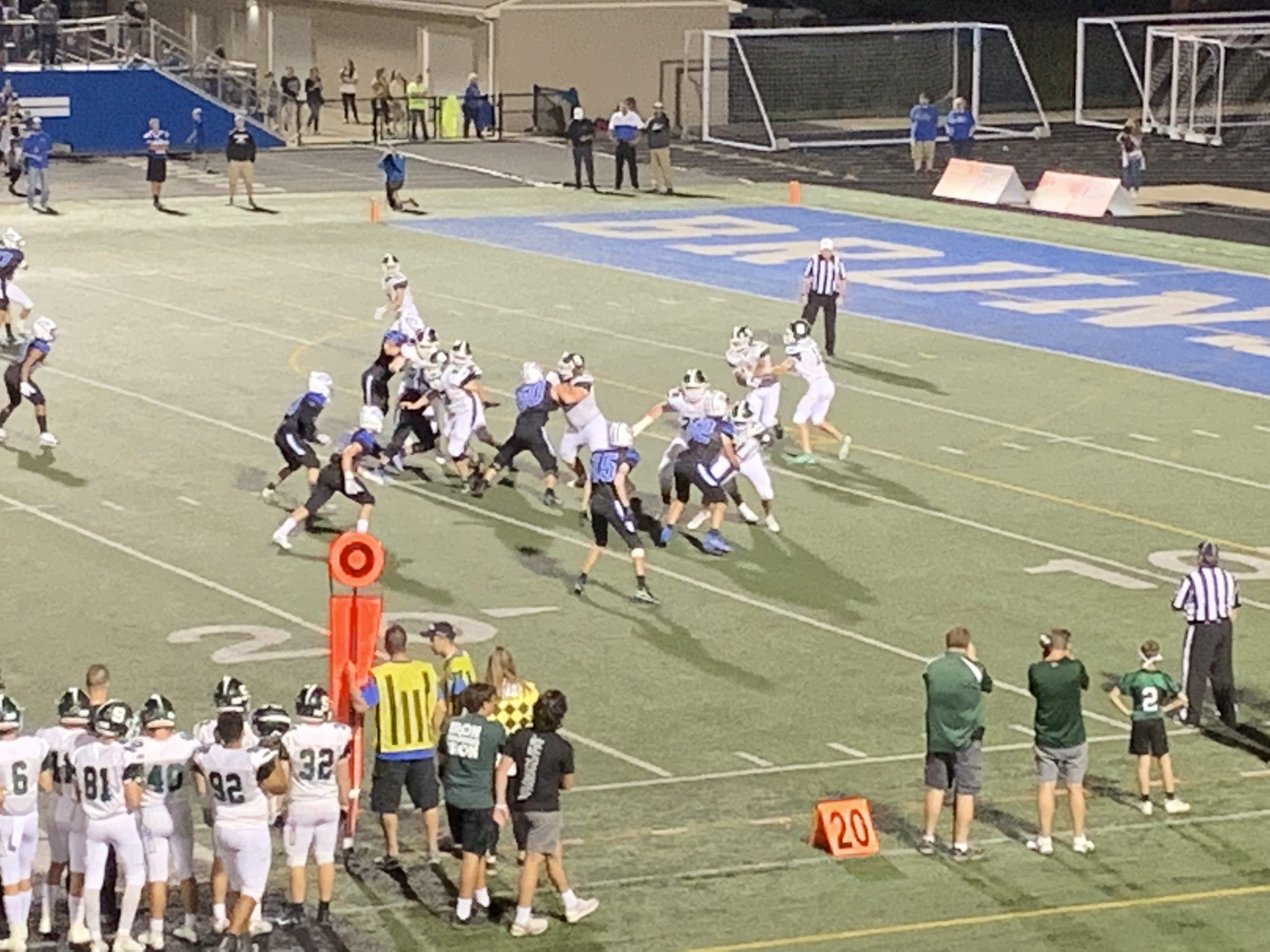 BRUNSWICK, OHIO – The 2019 edition of “The Battle of Boston Road” lived up to its billing as both schools battled to the wire with the Brunswick Blue Devils holding on for a 20-14 victory over the Strongsville Mustangs.

Strongsville’s standout senior running back Garret Clark was stopped a half yard short of the goal line on the game’s final play of this Greater Cleveland Conference clash at Brunswick Auto Mart Stadium.

After a brief hesitation waiting for confirmation of the call, the Blue Devil players exploded in celebration, marking a signature win for this program that is trying to reach the upper tier of the GCC.

The endgame drama was fueled exponentially by a holding call against the Mustangs that overturned an apparent game-tying touchdown just a few plays previously.

After having the tying points taken off the board, Strongsville had to hustle just to put themselves in position for that final play.

But the Brunswick defense stepped up when it mattered most, stuffing the line of scrimmage and somehow stopping Clark with one defender holding on while another met him head on.

Besides the last-play heroics, junior linebacker Kyle Scherette was big throughout the game.

His interception on Strongsville’s first drive of the game resulted in the game’s first score as he returned it all the way for the touchdown, giving the Blue Devils an early 7 – 0 lead at the 8:28 mark of the first quarter.

After exchanging possessions for much of the rest of the quarter, Strongsville managed a sustained 80-yard drive culminating in Clark’s first touchdown of the night from nine yards out.

With the PAT, the score was tied at seven with 29 seconds remaining in the first quarter.

Brunswick struck first in the second quarter on a 43-yd field goal by senior kicker Justin Hagler, for a 10 – 7 lead with 10:33 left in the half.

Strongsville’s next possession ended in a special teams disaster on a bad snap, giving the Blue Devils the ball on the Mustangs’ 25-yard line.

Seconds later, junior standout quarterback Jake Scherette then ran in from 25 yards out, and Brunswick led 17 – 7 with 9:25 left in the half.

Refusing to back down, the Mustangs drove down the field with Clark finishing the drive with his second score of the night, this time from three yards out, to cut Brunswick’s lead to 17 – 14 with 4:41 left in the half.

Clark finished a big night with 209 yards rushing on 35 carries and the two touchdowns.

Brunswick managed to score before the half on a 31-yard field goal by Hagler with 2:17 to play in the half, giving them a 20 – 17 advantage.

Strongsville rallied to drive down the field and had a chance to tie and perhaps take the lead on a play that was eerily foreboding for the Mustangs.

From the 3-yard line, quarterback Maddux Beard’s pass to Clark floated just wide on the final play of the half, and the teams went into the locker rooms with Brunswick up 20 – 14.

At this point, it appeared this game may become the offensive showdown expected.
The second half told a completely different story as it was filled with more penalties, more special teams mistakes, and stoppages as some players suffered cramps in the warm, summer-like atmosphere.

Blue Devil quarterback Jake Scherette was one of those affected by cramps as he had to leave for a few plays in the third quarter, but returned for the final quarter.

After the game, a tired but ecstatic Scherette talked about the overall team effort and especially the defense’s role in the win.

“I mean I couldn’t be more proud of every single one of them. [The defense] played their tails off and gave the offense opportunities to score. I love every one of them.”

After a scoreless third quarter, Strongsville seemed to have momentum as they were driving deep into Brunswick territory.

But the drive stalled, and facing fourth and eleven from Brunswick’s 21-yard line, Beard’s pass was broken up, returning possession to the Blue Devils at the 9:54 mark of the fourth quarter.

Brunswick then drove down the field and had a chance to make the game a two-score contest when Hagler attempted a 44-yard field midway through the quarter.

His kicked veered left, and Strongsville regained possession, driving down the field to set up the final series of plays.

Though the field goal try was no good, Coach Pinzone felt he made the right call.

“[Hagler] has done that several times. Some of the coaches weren’t happy, but that was my decision.

“It didn’t work out in the end but our defense and our key players made the plays they needed to.”

After the game, Strongsville Coach Lou Cirino did not second-guess his own call at the end of the game.

“We went with our best run play, the zone. I thought we got it in. It didn’t appear that way. I mean we ran our best play and didn’t get it in.”

Coach Cirino talked about missed opportunities and bad plays saying, “Those were all things we did to ourselves.

“We beat ourselves in that game, and that’s the hardest part about this right now.”

For week six both teams continue GCC play as Brunswick hosts Shaker Heights while Strongsville will host the Euclid Panthers, 55 – 8 winners over Elyria on Friday night.