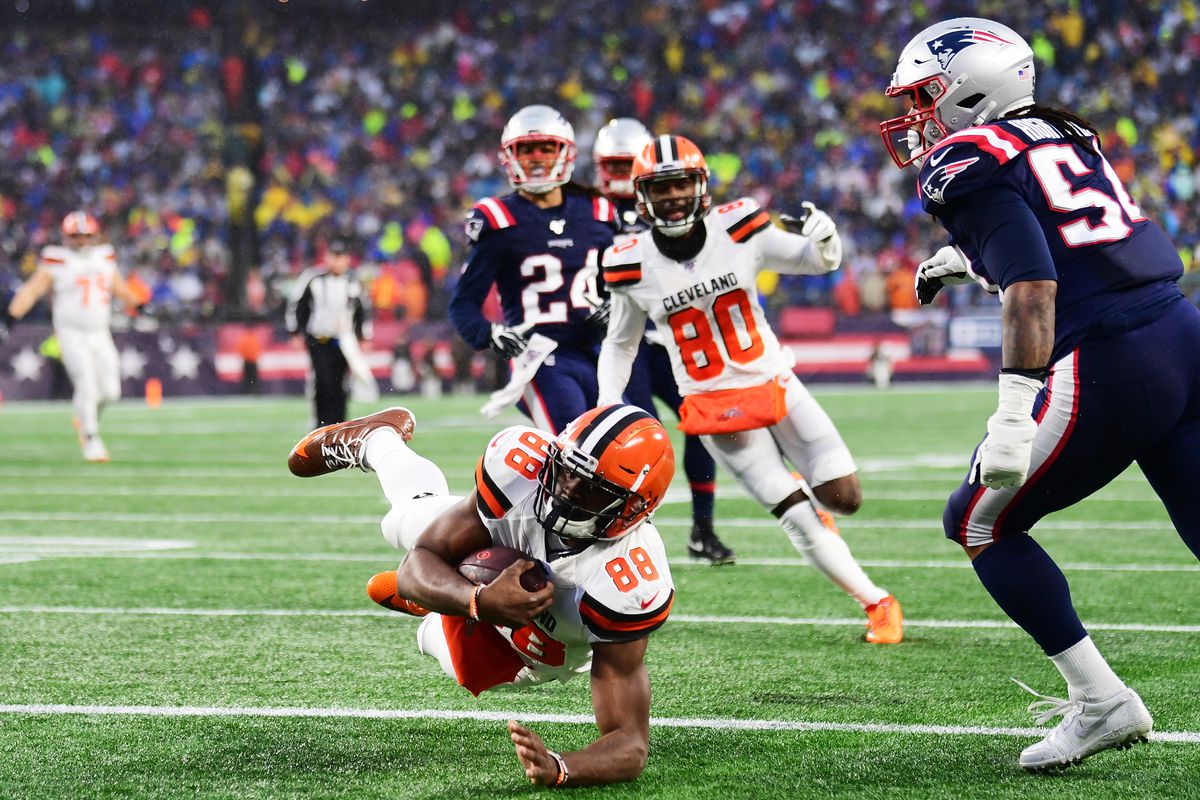 It’s hard to pick against the Patriots. In Week Eight Browns fans found out why. The Browns spent much of Sunday unable to get out of their own way against the defending Super Bowl champs. That’s the kiss of death against a Patriots team that rarely makes mistakes of their own. New England took advantage of the Browns 13 penalties and three turnovers on way to a 27-13 win.

The loss drops the Browns to 2-5 on the season as the road to the playoffs is a daunting one despite the fact that a lighter schedule awaits the Browns for the second half of the season. That won’t matter much if the same issues that plagued Cleveland for most of the season and in Sunday’s loss continue to rear there ugly head.

Here are five takeaways from the loss to New England

The Browns handed out plenty of treats to the Patriots for Halloween, gifting them with an unprecedented three turnovers on three straight snaps, all in the first quarter. First came a Nick Chubb fumble on a second and seven with 5:45 to go in the quarter that Dont’a Hightower returned 26 yards for a touchdown. On the very next play from scrimmage Chubb ripped off a 44-yard run but coughed it up again at the end of the play to give it back to New England. And then after forcing a Patriots punt the Browns started their next drive with a strange interception as Lawrence Guy bullied his way through Joel Bitonio to catch a steal a shovel pass from Mayfield.  Two plays later the Patriots were in the end zone again and the Browns found themselves off to the worst possible start imaginable against the defending Super Bowl Champions, 17-0.

Aside from those two uncharacteristic and costly fumbles, Nick Chubb was as good as ever against a Patriots defense that has only allowed one 100-yard rusher this season (the Bills Frank Gore in Week Four). On 20 carries Chubb ripped off 131 yards, much of which came after contact. That’s the most yards they’ve allowed to a single back this season and the team’s 159 yards is the most they’ve allowed to a single team. Chubb bruised the Patriots defense into submission to the point where they started stacking the box with eight or more guys. Unfortunately, as has been the case for much of this season, Chubb’s superb effort wasn’t nearly enough. That largely comes down to the three first quarter turnovers of which Chubb was a contributor. To see the Georgia product bounce back though and trample one of the best defenses in the NFL though was at least one positive to take away from a losing effort.

Seven games into the season the Browns 2019 campaign has been defined by penalties. Even with an extra week to prepare for the Patriots and correct their penalty problem, nothing changed for Freddie Kitchens squad. Another 13 accepted penalties for the Brown and Orange will bring their season total to 70 for the season. The worst part is they come at the most inopportune times. Big pass play…offensive pass interference. Third and short…false start. They just can’t help but shoot themselves in the foot. Kitchens comes from the Bill Parcell’s coaching tree and has used the legendary head man’s “you are what your record says you are” quote several times, in Kitchens case his team isn’t only defined by it’s record but maybe even more so by how undisciplined it is.

As long last Olivier Vernon stood out as a top performer on the Browns defensive line. Vernon wreaked havoc in the Patriots backfield piling up six total tackles, one sack of The Goat Tom Brady and two tackles for loss. It was just his second sack of the season and his second-consecutive game with four or more tackles. His sack was one of three on the day as Myles Garrett notched his 10th of the season. Maybe that’s a sign that he’s starting to be the playmaker he was brought in to be. To this point he’s gone largely unmentioned so more consistent play would certainly be welcomed by the Browns.

5) Not quite doomsday. But…

Normally a loss to the Patriots is nothing to freak out about. There’s a reason they’ve won six Super Bowls this century including three of the last five. Had this loss come a couple weeks ago the collective response would have been “alright it’s the Patriots, onto the next one.” And while a softer schedule looms for the Browns the rest of the way, this loss to the Patriots is a detrimental one. The margin for error over the next nine weeks is slim to none for Cleveland. Generally the benchmark for a wild card spot is about 10-6. To get there, the Browns must win eight of their last night games. In a year where there’s a lot of traffic for those wild card spots though maybe 9-7 gets you in. That means the Browns can lose just two games the rest of the way. And while, yes, the schedule looks considerably easier based on what Cleveland has shown us through eight weeks how confident can anyone be that they’ll win seven or eight of nine?