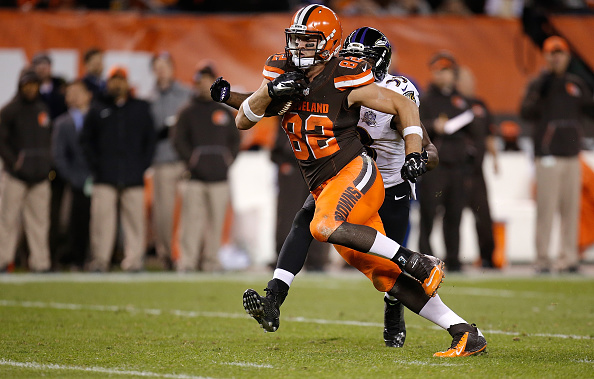 The Cleveland Browns released tight end Gary Barnidge on Friday, one day after selecting tight end David Njoku out of the University of Miami with the 29th overall pick in the draft.

Barnidge was quick to welcome Njoku to the team after the choice was made:

Welcome to the TE room @David_Njoku80 looking forward to getting started.

14 hours later, Barnidge posted his reaction to the news he was released.

I want to thank the Cleveland Browns for giving me my opportunity and looking forward to seeing the change. Time for the next step.

Barnidge will be 32 years old at the start of the 2017 season, entering his ninth year in the league.

All but one of those touchdowns came after he joined the Browns in 2013.

Since joining the Browns, Barnidge has caught 160 passes for 1,938 receiving yards.

His best season came in 2015, when the Louisville-alum made 79 receptions for 1,043 yards and scored nine touchdowns.

Any thought of a two-headed monster at the tight end position between Njoku and Barnidge was quickly erased Friday and now the Browns tight end room features the rookie along with second-year player Seth DeValve – a fourth-round pick out of Princeton in 2016 – and second-year player Randall Telfer (who went undrafted out of USC in 2016).

DeValve caught 10 passes for 127 yards in his rookie season and for now, appears to be Cleveland’s No. 2 tight end option behind Njoku.

We’ll keep you posted on any more updates regarding Barnidge’s departure.