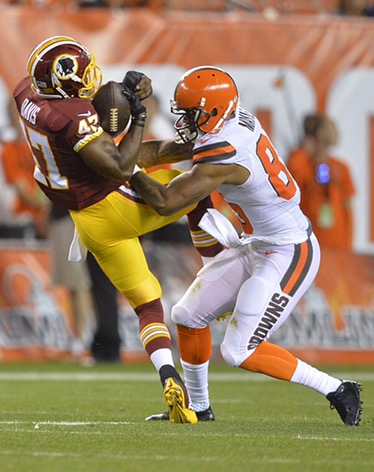 This was supposed to be the week when Cleveland Browns quarterback Robert Griffin III redeemed himself in front of his former team. Due to the shoulder injury he suffered week one, the redemption has been put on hold and Now it’s Cody Kessler’s time to shine as the Browns travel to the nations capital to take on Kirk Cousins and the Washington Redskins.

Washington (1-2) has been struggling so far this season as they got their first win last week against the New York Giants. Even with the losing record, QB Kirk Cousins has the second most passing yards in the league so far (989) and has 3 touchdowns.

You can’t count Cousins out yet because last year in his first season as the full time starter, he threw six touchdowns and eight interceptions his first six games. After the cold start, he went on to throw 23 touchdowns and only three interception for the remainder of the season and led the Redskins to the playoffs.

The last time Cousins faced the Browns was back in 2012 when he started over an injured RGIII and won the game with ease.

Cody Kessler will be making his second start in his rookie campaign and he’s looking to improve from last week. Kessler started off rough getting hit a few times and fumbling twice but recovered one of them. He didn’t throw and interception or make devastating mistakes but his vision of the field and timing need to improve if he wants to lead this team to its first victory.

Browns RB Isaiah Crowell second in the league in rushing yards (274) and will look to have a monster day against a defensive front that hasn’t lived up to its potential so far this season. Look for Duke Johnson Jr to get touches as well as he performed well with Kessler last week.

The Redskins have some scary WR with Pierre Garçon and Desean Jackson and their tight end Jordan Reed are the real test for this secondary will be. Cousins can sling the ball with the best of them and he has the guys that can catch them.

It’s going to be hard to recognize any of the Browns receivers week to week with the exception of Terrelle Pryor and Corey Coleman who will hopefully be back soon. With Josh Gordon stepping away from football, rookies like Ricardo Lewis step in to get his first start and taste of a full NFL game

This game could go either way because the Browns are the more desperate team looking for their first win while the Redskins try to climb back up the ladder to show they weren’t a one year wonder.

The Best Soccer Players to Ever Come out of Cleveland
The Browns Rank 23rd In An All-Time Franchise List: I’ve Never Felt So Disrespected In My Life