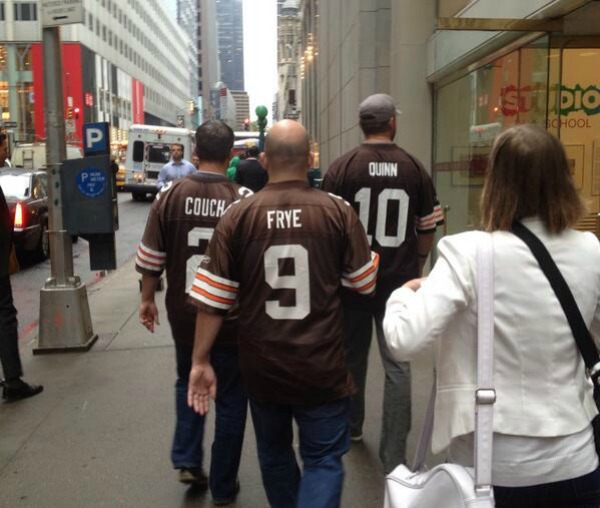 I originally did this project heading into the 2012 Browns season. The headline was “Can The Browns Stop the QB Sieve?”

We’re two games into the 2015 season, and that number has grown from 16 all the way to 23, and don’t be surprised if that number increases to 24 or even 25 by the time the season is over. Because that’s the way the Browns’ luck has been as a franchise. We’re heading into the second game and the team is already starting their second quarterback.

The Expansion Era hasn’t been pretty for the Browns in terms of quarterbacks. Tim Couch has been the most stable QB the Browns have had, and he was sent packing after 2003.

However, you can even go back to the last few years the original Browns were intact to see some unrest within the QB ranks. You can look at the last 25 seasons of Browns football, which spans 28 years (thanks to the three years the Browns didn’t exist), and only three times has a Browns QB started all 16 games during that span (one Browns QB did it twice).

We go back 25 years because that’s when Bernie Kosar first injured his arm during the season opener against the Kansas City Chiefs. The year was 1988, and little did anyone know that the man under center was going to revolve more than the door outside the Cleveland Clinic.

1988
Record: 10-6 (0-1 playoffs)
Head Coach: Marty Schottenheimer
Postseason: Yes (Wild-Card)
Division Finish: Second
Opening Day QB Starter: Bernie Kosar
Season-Finale QB Starter: Don Strock (Postseason: Strock)
Other QBs who started: Gary Danielson, Mike Pagel
Other QBs who played: N/A
Leading Passer: Kosar
Noted: Kosar was injured in the second quarter of the season opener and missed the next six games. All told, he only started nine of the 16 games, suffering another season-ending injury in the second-to-last game of the regular season. Danielson broke his ankle in Week 2 and never played again. Pagel started in Week 3 (and won), but separated his shoulder in Week 6 making a tackle after a blocked field goal and didn’t play again until the Wild-Card game. Strock, who was literally summoned off of a golf course to sign after Kosar’s injury, only started two games, but won both, including a huge 28-23 home win over the Houston Oilers in the season finale to clinch a Wild Card berth. Strock was injured during the Wild Card game and never took another NFL snap. Pagel finished the game, but couldn’t lead the Browns to a victory. Schottenheimer resigned under pressure a few days after the playoff loss and immediately took over the Kansas City Chiefs.