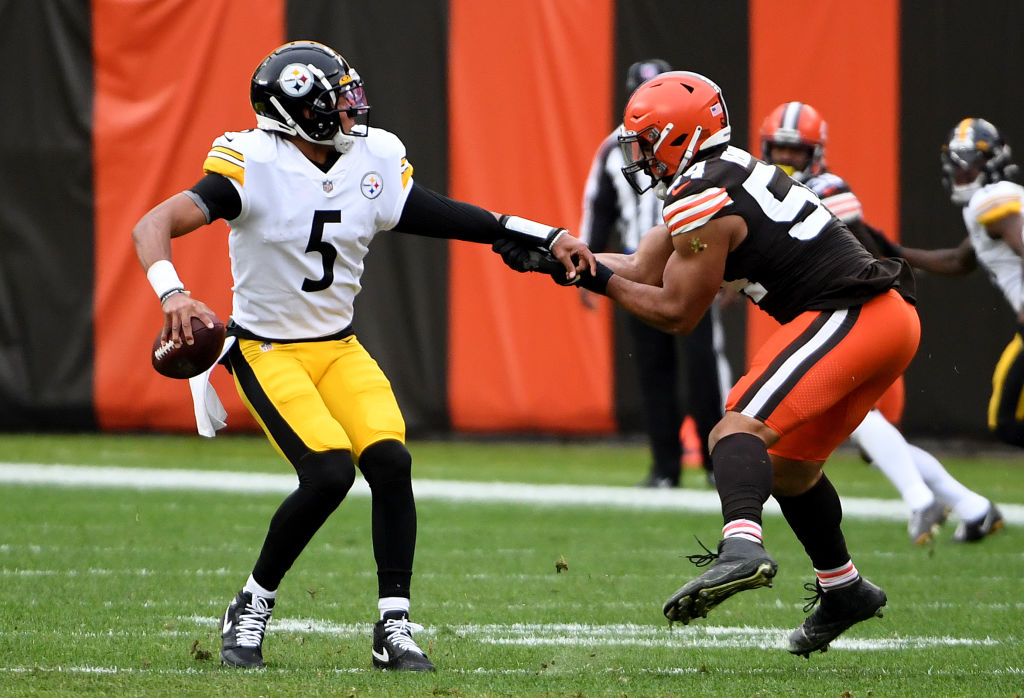 The Cleveland Browns found themselves only needing a win to punch a postseason ticket, with the Pittsburgh Steelers coming to town Sunday playing a plethora of backups with their own playoff spot clinched. A win would come easier said than done, as the Browns battled their own situations and losses to the roster after Covid continued to strike the Browns locker room throughout the week.

Being short handed themselves, the Browns were forced to grind out the win. A late surge from the Steelers offense had the Browns needing to stuff a two point attempt to avoid overtime, doing just that to beat the Steelers 24-22 and give themselves a playoff game in next week’s wildcard games.

The Steelers opened the game with Mason Rudolph at the helm on offense for a resting Ben Roethlisberger. After James Conner ran for eight yards between first and second down, Rudolph would find Chase Claypool for 13 yards and a first down out to the 44 yard line. A five yard connection to Juju Smith-Schuster seemingly kept the momentum going, however two straight incompletions would force a punt on the opening possession of the game.

On offense, Nick Chubb got things started quickly for the Browns, rushing for 11 yards on first down. Baker Mayfield would then put the Browns in Steelers territory after connections of 14 and 10 to Jarvis Landry and Austin Hooper respectively. After the Hopper reception, the Browns were at the Pittsburgh 47 before Chubb busted one open all the way to the end zone for an immediate 7-0 lead for the Browns.

The Browns first possession of the second quarter brought a little more success to the offense. The Browns started behind the sticks after a false start on Joel Bitonio, but Chubb rattled off 13 to set up a second and two. It was then that Kevin Stefanski dialed up the big shot, as Mayfield found KhaDarel Hodge deep for 42 yards to the Pittsburgh 25.

After the big play, Mayfield found another 11 with a pass to Landry, before Chubb added in 10 yard on the ground to set up a first and goal. However, two incompletions bookending a negative run by Chubb on second down forced the Browns to settle for a Cody Parkey field goal to take a 10-0 lead.

The Steelers offense responded to the score, mounting a drive on their own big play from the quarterback. After three straight runs from Conner moved the chains, Rudolph found himself in a third and long two plays later before finding Diontae Johnson for 41 yards to the Cleveland 25. Following the big gain, Josh Dobbs came in at quarterback, running for 13 yards to the 12 yard line. The Browns defense would tighten up however, only allowing one yard on a second down pass from Rudolph to Conner before forcing a Chris Boswell field goal.

After the defense gave up their first score of the game, the offense for the Browns failed to produce. A nine yard second down sack of Mayfield forced a third and long, causing a 12 yard Kareem Hunt run to fall just short of a first down, as the Steelers defense forced a three and out.

The Steelers offense found some more success after the quick punt, as Rudolph found some passing lanes in the depleted Browns secondary to get a field goal with just over a minute to go in the half to cut the Browns lead down to four.

Looking to score late in the half, the Browns dropped Mayfield back to pass. A first down incompletion, before a second down sack of Mayfield changed their minds however, as a Hunt run on third would be called to bleed out the half with the Browns leading 10-6.

The Browns opened the second half on offense, finding a quick first down, before a seven yard sack brought up second and 17 for Mayfield and the offense. On the second down play, Mayfield found Landry for 14 to bring up third and short. However, Chubb would get stuffed short of the first down marker on a two yard third down run. Keeping the offense on the field, the Browns head man Stefanski seemingly was planning to gamble early in the half, but Bitonio was penalized for a second down on a false start to force a Jamie Gillian punt.

After the punt, the Steelers offense got another big play from Rudolph, facing a third and 7 before finding Claypool deep for 41 yards to the Cleveland 36. The drive would however stall there after two straight incompletions brought up a third and long and an eventual Boswell field goal as the Browns now only led by one midway through the third quarter.

Clinging on to a very slim lead, Mayfield found a surge to lead the Browns down the field on the ensuing possession. Opening the drive finding Rashard Higgins for 13 to immediately move the chains. Chubb got the call on first and second down to follow, only gaining five total yards, before Mayfield kept the drive alive with a 14 yard connection to David Njoku on third down.

The big third down play barely put the Browns in Steelers territory, that is until Mayfield scrambled for 28 yards all the way to the 16 yard line. Two plays later Mayfield found Hodge for a 10-yard first down at the two, setting up a touchdown pass to Hooper on the next play.

After the Browns extended their lead, the defense kept things going on the next possession. Rudolph found Smith-Schuster on first down for seven yards, prior to Benny Snell finding 6 yards and a first down to the 41 yard line. Momentum halted there for the Steelers however, after a first down incompletion and one yard run from Snell brought up third and nine. On the third down play, Rudolph would get rushed into a throw by rushing linebacker Jacob Phillips, flailing one into the arms of Browns defensive back M.J. Stewart.

Stewart returned the ball 30 yards all the way to the redzone at the Pittsburgh 20, as the Browns offense looked to extend their lead even further. After Chubb found three on first down, and Njoku lost a yard on second down, the Browns faced a third and long in danger of failing to take advantage of the turnover. However, Mayfield had other plans, connecting with Hodge for 15 yards to the three yard line. Stefanski opted for misdirection on the touchdown, handed the ball off left to Landry as the offense moved right for the three yard touchdown.

Facing a 15 point deficit just into the fourth quarter, the Steelers needed a score to keep hopes alive. Rudolph found Vance McDonald on the opening play for 14, before Conner rattled off 11 on two runs for a first down at midfield. Rudolph moved the chains again with a 10 yard connection to Claypool, but the drive would seemingly be stalled with the next set of downs. Combining for only 4 yards on first and second down before an incompletion on third, the Steelers faced a fourth and six to keep the drive alive.

On the fourth down play, Rudolph would find Johnson for an 8 yard first down to the Cleveland 28, before three straight incompletions brought up another fourth down situation. Despite the defense being stout, Rudolph would convert once again, this time in the endzone to Claypool for a 28 yard touchdown that cut the Browns lead to eight.

With their lead diminishing slowly, the Browns had two options, score to put the game away or bleed the clock on their way to a playoff clinching win. Mayfield opened the next drive with a 13 yard pass to Hooper to keep the defense honest, before Stefanski went run heavy with Hunt. The Browns rode Hunt down the field to the Pittsburgh 38 before stalling out. Hunt added in seven yards on first and second down, before a four yard sack brought up fourth down. Instead of opting for a long field goal from Parkey, the Browns offense went for it, failing to convert on an incompletion.

The good news for the Browns on the last drive happened to be that they bled over six minutes off the clock, however with no score the Steelers offense had their eyes on a score to tie the game. After two straight incompletions immediately forced the Steelers into a long third down, Rudolph would find Smith-Schuster for a 13 yard first down. A false start penalty would move the ball back five yards, to no avail as Rudolph found Johnson for 47 yards to set up a first and goal at the 10. Anthony McFarland found six on first down, before Josh Dobbs found McDonald at the two on second down. On third down, Rudolph would return to the game to find Smith- Schuster for a two yard touchdown pass.

After the score, the Steelers would need a two point conversion to tie the game, however the pass to Claypool would fall incomplete on the attempt. The Browns were holding on to a two point lead, needing to recover an onside kick and get a first down to seal the game.

Despite fumbling the recovery on the kick, Stephen Carlson was able to hold on to give the Browns offense the ball. Chubb found a seam for eight yards on first down, before getting stuffed on second down to bring up a crucial third down play. Needing three, Stefanski called on Mayfield to run it himself behind a wall of Hunt and Chubb blocking to the outside. Mayfield would follow his blocks to find a seam just over the line to gain to seal the victory after a kneel down on the following play.

The Browns beat the Steelers 24-22 to split the season series, and put an exclamation point on an incredible 11-5 season. With the win, the Browns also punched their ticket to the playoffs for the first time in 18 years.