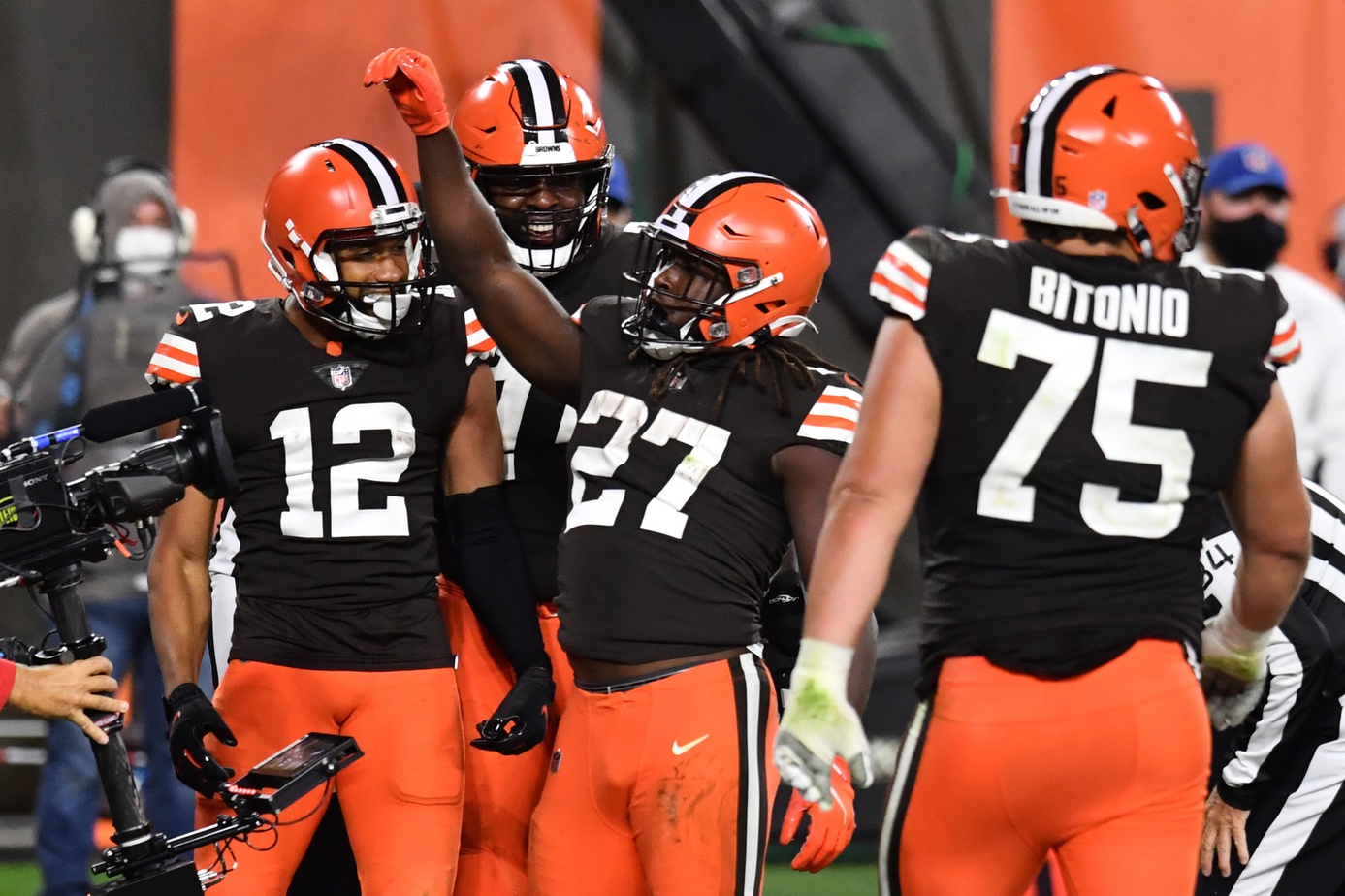 The Cleveland Browns had their first chance at a primetime matchup Thursday night against the Cincinnati Bengals in Cleveland. The stars showed up for the Browns in primetime as Nick Chubb and Kareem Hunt both scored twice. The Browns combined the big day from the two backs with another score from Odell Beckham Jr. to beat the Bengals 35-30.

The Browns opened the game on the defensive side of the ball, giving Joe Burrow the ball to lead off his first career primetime game. Burrow and the Bengals offense opened the game well against the depleted Browns defense, a 15 play drive deep into Browns territory at the nine yard line. A third-down sack from Adrian Clayborn however, caused a loss of eleven, halting the impressive opening drive, forcing the Bengals to settle for a field goal.

Not to be outdone, Baker Mayfield and Nick carried the Browns offense to a 10 play touchdown drive with their own opening possession. Mayfield was perfect on the drive, before Chubb ran it in from the Cincinnati eleven to give the Browns the 7-3 lead.

Both offenses mounted lengthy drives to open the game, draining the clock out of the first quarter. Following the Browns score, the Bengals would get a first down thanks to an eight yard pass from Burrow to A.J. Green combined with a five yard run by Joe Mixon. However, a Sheldon Richardson sack would end the first quarter.

With the sack to end the quarter, the Browns defensive halted all momentum held by the Bengals offense, forcing a punt two plays later.

The Browns went back to work on offense for the second time in the game in the second quarter. The drive was a quick one, after two runs from Chubb gained 14 yards, Mayfield found Beckham deep for a 43 yard touchdown, extending the lead to eleven points.

Burrow responded quickly for the Bengals, doing it all himself on a six play touchdown drive that ended with a 23 yard pitch and catch from Burrow to C.J. Uzomah. Burrow was five of six on the drive, throwing on every play to slice through the Browns defense.

After the Bengals defense forced the Browns to go three and out following the score, the Browns defense would keep the lead safe stifling the Bengals offense in four plays.

Following the Browns’ score, Burrow led the Bengals offense down the field before the end of the half, setting up a Randy Bullock 43 yard field goal to make the halftime score 21-13.

The Browns opened the second half on offense, driving all the way down to the Cincinnati two. However after a third down incompletion from Mayfield to Beckham, head coach Kevin Stefanski opted to go for it on fourth, turning the ball over on downs after the failed conversion.

Five plays later, a strip sack from Myles Garrett would give the Browns the ball on offense at the one yard line. The Browns took advantage with a second down touchdown run from Nick Chubb, his second of the game, to extend the Browns lead.

The Bengals followed up the score, putting together an impressive drive before a three yard touchdown run from Giovani Bernard was overturned after replay showed his knee down with the ball short of the goal line. After the overturned touchdown, the Bengals momentum was halted after a couple runs for negative yardage, forcing the Bengals to settle for a field goal.

After the score, Hunt marched the Browns offense all the way down to the Bengals 32 yard line. However, Mayfield would look for Harrison Bryant in the endzone on the second down play, as William Jackson cut the route to intercept Mayfield down the middle.

After the interception, Burrow and the Bengals were facing a twelve point deficit with just over eleven minutes to go in the game. Burrow kept the Bengals hopes alive with an impressive 14 play drive that took just over five minutes, resulting in a four yard touchdown pass to Mike Thomas to cut the deficit to five.

With their lead now cut to five, the Browns offense put together a statement drive late in the game, running the ball six straight times with Chubb and Hunt. Hunt would end the drive on the sixth play with a one yard touchdown run to give the Browns the 35-23 lead with less than four minutes to go.

It was desperation time for the Bengals, and their rookie quarterback delivered with a 16 play touchdown drive ending with a Tyler Boyd nine yard catch in the endzone. The drive saw the Bengals once again cut the deficit to five with 42 second to go in the game.

The Bengals attempted an onside kick to try to steal the game away from the Browns. However, fullback Andy Janovich would recover the kick for the Browns, leaving a kneel down from Mayfield as the final touch on the game as the Browns won 35-30.

Overall, the Browns offense looked significantly better than they did in Sunday’s devastating opener against the Baltimore Ravens. Injuries still have the defense depleted as they surrendered 30 points to a very young Bengals offense. It was a better look for the Browns as they look ahead to next week against the Washington Football Team.