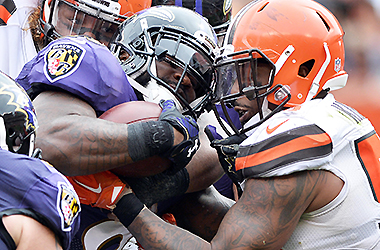 The losing streak for the Cleveland Browns continued on prime time television as they were manhandled by the division rival Baltimore Ravens.

The very first defensive play for the browns on the night was almost a penalty for 12 men on the field but head coach Hue Jackson was quick to see the amount of players and called a timeout. After the Browns collected themselves, the held the Ravens offense off from scoring early and forced the punt. Cody Kessler and the offense picked up a first down on their first offensive possession but that’s all they would do besides use another timeout in less than five minutes into the game. The Ravens later in the quarter drove down the field behind Joe Flacco but he would be picked off on a overthrown ball and the Browns would start the second quarter with the ball.

After the Browns failed to gain any momentum off the turnover and were forced to punt yet again. The Ravens would drive down the field again but get inside the five yard line but would be held to a field goal to make the score 3-0. It was a sluggish start for the Browns but they picked it up in the second quarter when Kessler hit backup TE Seth DeValve for a 25-yard touchdown to take the lead 7-3. Due to a personal foul call on the Browns, the Ravens would drive into scoring position and Flacco spiked the ball down with four seconds left in the half so Justin Tucker would kick the successful field goal to make the score at the half 7-6 with the Browns still leading.

The second half didn’t start off too great for the Browns as they couldn’t move the ball and Kessler had to throw the ball away on third and long to punt the ball away. The Ravens would score on their next possession with a 4-yard touchdown to TE Darren Waller in the back of the endzone wide open to take the 13-7 lead. Kessler was taken out of the game and replaced by Josh McCown even though Kessler wasn’t injured but McCown threw and interception on his second throw. Right after the turnover, Joe Haden picked off Flacco in the endzone to give the Browns another chance. The Ravens would score again on a 11-yard pass to Steve Smith Sr. to increase the lead to 21-7.

McCown was brought back in and looked like he was gonna be the starter for the rest of the game but he threw another interception in the endzone in the fourth quarter. It was all Baltimore from that point on. Flacco threw for another touchdown and the Browns seemed to give up on national tv. The defense couldn’t stop the Baltimore rushing attack and Flacco threw to anyone that was more than 15-yards down the field with ease. McCown would be strip sacked for the third turnover by the Ravens defense. McCown couldn’t even thrown the ball out of the endzone on their final possession as the ball was batted down twice by the defensive line of the Ravens.

The Browns will take on the Pittsburgh Steelers next Sunday afternoon still seeking their first win to feel good about something about the team.

2016-17 Charge Opening Day Roster
Based on His Own Words; Can Haslam Keep Jackson if the Browns Fail to Show Improvement in the Last Six Games?