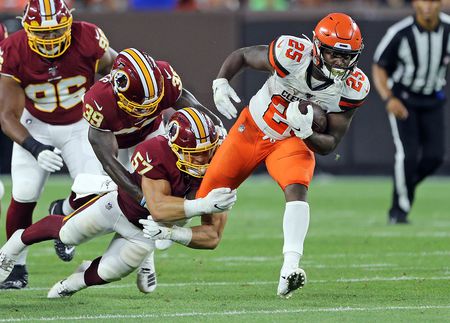 The Browns Sunday announced a couple roster moves as their Monday matchup with the Baltimore Ravens closes in to end week 14 in the NFL.

The team first activated offensive guard Wyatt Teller from the Reserve/COVID-19 list, meaning he will play Monday against the Ravens.

The Browns also announced they have waived running back Dontrell Hilliard.

The move to dump Hilliard comes as somewhat of a surprise, considering he was with the team since 2018 and also could return punts and kicks.

In his time in the backfield he has 199 receiving yards with 22 catches and 97 rushing yards on 22 carries with two touchdowns.

HIlliard was waived during cuts back before the start of the season, but was brought back to the team’s practice squad and eventually was brought up to the active roster before the victory in Dallas against the Cowboys.

The Browns remain three-point underdogs in Monday’s battle with the Ravens.

Browns DE Garrett Named the Team’s 2020 Walter Payton Man of the Year
Is Being an Underdog Against the Ravens a Good Thing for the Browns?