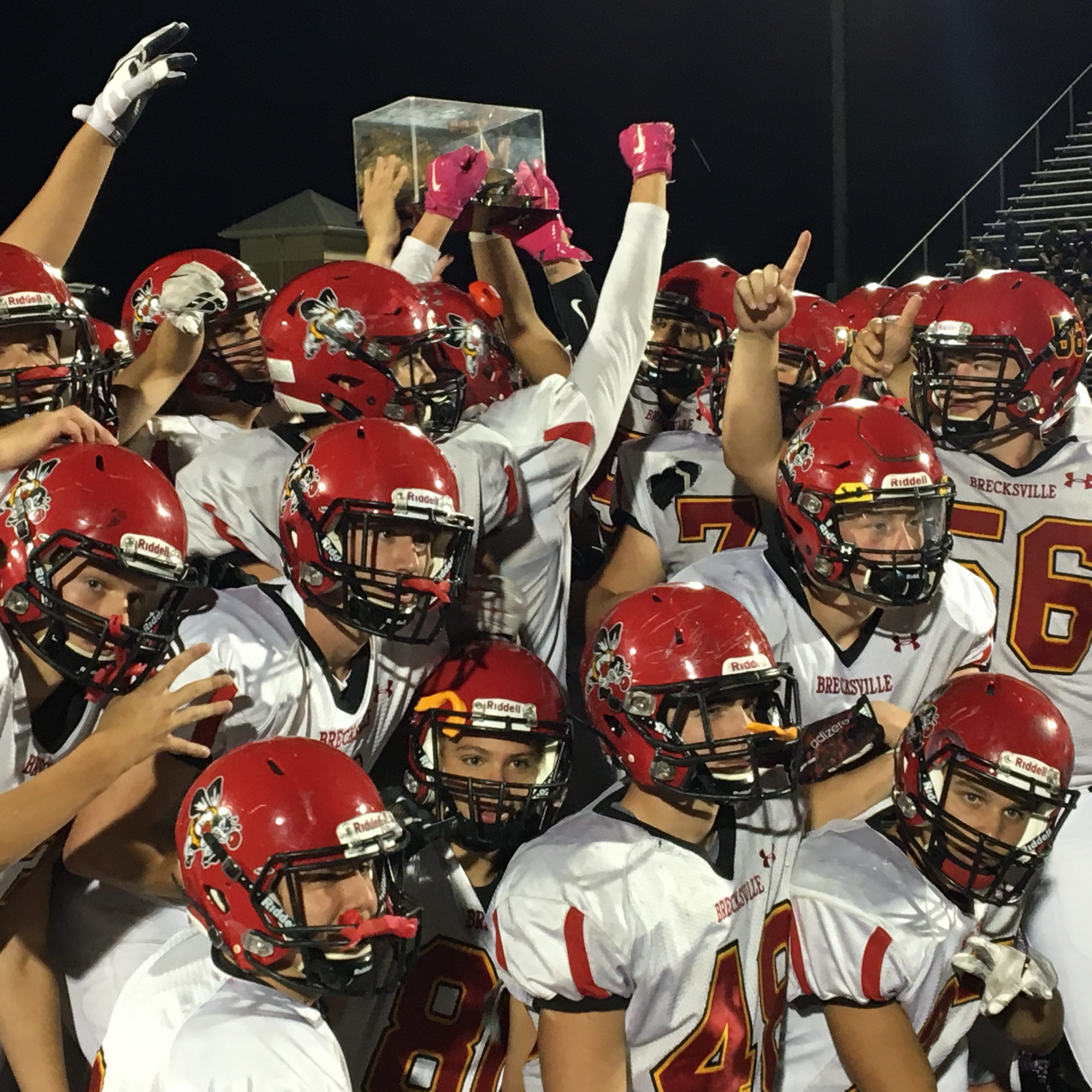 NORTH ROYALTON-The Brecksville-Broadview Heights Bees had a lot on their minds heading into their contest Friday night against their neighboring rival, the North Royalton Bears. The Bees put their perfect 6-0 record (3-0 conference record) on the line. Brecksville was also trying to stay in the Region 5 State Playoff picture (they are ranked 7th), and not look forward to the toughest part of their schedule, with the likes of Wadsworth, Stow, and Hudson on the schedule.  Their also was this little thing called “The Golden Shoe”, which is the coveted trophy both of these two schools have been playing for since 1937, which is one of the oldest in the state of Ohio. The Bears were trying to snatch away the trophy from the Bees for the first time since 2012. Brecksville, however, would have none of it, as they steamrolled their rivals, 50-34.

The upset-minded Bears (1-6, 0-4 in the Suburban League) roared to an early 7-0 lead, as Brecksville (7-0, 4-0 in the Suburban League) fumbled on the opening kickoff, which North Royalton recovered at the Bees 8 yard line. Three plays later, Junior runningback Jake Franczak ran 3 yard into the endzone to give the Bears an early lead. The Bees, however, quickly responded on the ensuing drive, as Junior tailback Alec Buckley was able to scamper on into the endzone from a yard out. Junior Tight End Jack O’Donnell caught the two-point conversion pass, to make the score 8-7.

After Brecksville was able to stop North Royalton’s offense on the next series, the Bees very next play on offense, Alec Buckley bolted down the left side 76 yards untouched for the Bees touchdown, to give the visitors a 15-7 lead to start the second quarter. The Bears, however, were able to respond with a drive of their own, as Freshman QB Joe Marousek was able take North Royalton down the field, capping off the drive with the freshman sensation taking it to the house from 9 yards out, making the score 15-14. Brecksville was able to march the ball back down the field on their next possession, as Senior QB Luke Strnad was able to find Senior wide receiver Adrian Asimou and Junior Sam Wiglusz on several quick-hitting passes. Junior tailback Jordan Shaheen was able to finish the drive, scoring on a two yard run, to make the score 22-14. Brecksville was able to stop North Royalton on their next possession, which gave Strnad yet another chance to take his offense right down the field, with not only his arm, but with his legs, scrambling for several big gains. Strnad was able to find Wiglusz for a 39 yard touchdown, to make the score 29-14 at halftime. Brecksville had some very impressive offensive stats at halftime, accumulating over 400 yards of total offense. QB Luke Strnad was 14 of 22 passing for 235 yards with a passing TD, and chipped in another 67 yards on the ground. Adrian Asimou had 8 catches for 106 yards receiving, and Alec Buckley had 6 carries for 110 yards and 2 two touchdowns.

The third quarter starting out with both teams getting shut down offensively, as both teams were able to make defensive stops. The Bees were able to break through, however, later in the quarter, as Strnad was able to find Sam Wiglusz for a 9 yard touchdown pass, making the score 36-14 after three quarters.

Brecksville Head Coach Jason Black had this to say about his teams performance: “The first half was a little bit of each other feeling each other out. Nerves, butterflies, mistakes were made by both sides in the first half. I thought the second half we settled down and played some good football. We executed plays that were in front of us and towards the end of the first half we were able to do some things.” Senior QB Luke Strnad had this to say about his team’s performance tonight: “Overall as a team we played great. We have some things to work on offense, keeping it consistent. This is a nice win, but we have Wadsworth next week”.

Stars of the Game: Brecksville QB Luke Strnad was unofficially 20 of 28 passing, for 311 yards and two touchdown passes. Strnad added 69 yards on the ground on 4 carries as well. Adrian Asimou led the Bees with 9 catches for 116 yards. Tailback Alec Buckley had 11 carries for 132 yards and three touchdowns on the ground. North Royalton’s Joe Marousek accounted for 4 total touchdowns, as he ran for three scores and threw for another.

North Royalton plays at Nordonia on 10-14.