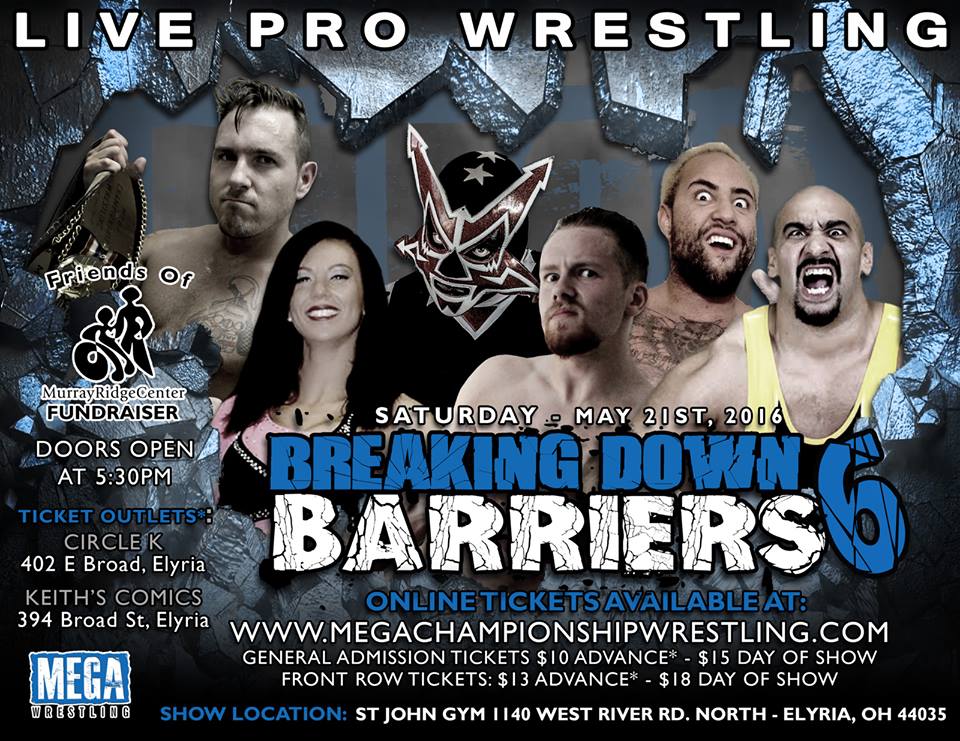 There were very big moments during Mega Championship Wrestling’s Breaking Down Barriers 6. Whether it was an arrival of a new face (or faces), a shocking turn of events or a title change, everybody had something that they will remember for a long time.

Mega Tag Team Champions (The Jersey Dukes) Duke and Anthony Falcone vs. Frankie Flynn and Daniel Winchester
In a match that featured a team that was going to pull out all of the stops against the champions, deceitfulness almost got in the way of a clean finish. The match was even for most of the way until the referee was distracted and Winchester was handed a shillelagh to take out Duke. After the blow that looked like it would end the match, Duke found a way to kick out and the match continued until Falcone and Duke gained enough momentum to finish the match off with the victory.
Winners: The Jersey Dukes

25-Man Battle Royale (Winner Gets A Shot At Any Title)
This match had it all. From hard-hitting action to the Running Man Challenge thanks to Jackson Stone, the free-for-all was definitely one to watch. Rookie wrestler Joseline made her impact felt greatly, as she made it all the way to the Final four left in the Battle Royal. She did not leave quietly, as everybody in attendance recognized her arrival onto the scene. At the end of the match, Jackson Stone eliminated Shawn Blaze to win the match, who was not happy about the elimination. It looked like Blaze had superkicked Stone out cold for the rest of the night before Stone was able to get back up and have the final laugh.
Winner: Jackson Stone

All Business vs. Mad Dog Manson and Mavis In A Careers Versus Careers Match
Deceitfulness and trickery seemed to be the ideal attack for All Business, as they attacked Mavis early on while using the strength in numbers. Mad Dog was frustrated for most of the match, as he watched Mavis get ambushed throughout most of the match. Mavis was able to reverse a double suplex into a double DDT. Mad Dog took control of the match, using his anger built up through the match to take out All Business. Agent Bauer was going for the final blow to end the careers of Mad Dog Manson and Mavis, as he threw powder right into the face of Mad Dog. Bauer went for the finish with a dive from the bottom turnbuckle. Before All Business could score the victory, Mavis hit all three members of the stable with a chair and scored the pinfall.

After the match, FlynnChester went to ambush the winning team before All Business had one more stand left in them. After taking out the villains, All Business said they gained respect for their competitors.
Winners: Mavis and Mad Dog Manson

Gregory Iron vs Rex Brody vs James Alexander vs Mysterious Movado
Before the match, Iron spoke to the fans in attendance, saying he was going to win the match. A match that was full of complete chaos, Iron and Alexander found themselves as the only two left in the ring at the end of the match. After a scramble, Iron caught Alexander in the roll-up for the victory.
Winner: Gregory Iron

Infinity Champion Derek Direction vs. Joshua Singh In A Dog Collar Match
This match was very physical and painful to watch,as Direction tried to end the match before it even started by choking Singh with the chain before he even got his part of the chain on. Singh finally caught his break and started to punish Direction with the help of his fans, who each got a shot at Direction. As the match continued, Direction started to gain the upper-hand and hit a Green Bay Plunge on a bag of Legos that was scattered out across the ring earlier on in the match by Direction. Direction paid for being over-confident by being powerbombed onto the Legos by Singh. Singh was distracted, which led to Singh being hit below the belt. Singh was choked unconscious which signaled the end of the match, giving Direction a 1-0 series lead in the Best-Of-5 Series.
Winner: Derek Direction

(C)N8 Mattson vs Eddie KnoxXx vs Alex Daniels for the Mega Championship
Dr. Daniel C. Rockingham introduced Alex Daniels to the fans, saying he was ready to win the title. The battle of strength versus agility was on full display, as Mattson and Daniels took advantage of KnoxXx when it came to being faster. Daniels had a backflip over the top rope and onto his opponents on the floor, which showed that he was indeed ready to claim the title. Daniels battled with KnoxXx, who was ready to win the title as well. Daniels saw his moment and capitalized by throwing Mattson out of the ring, taking out KnoxXx and hitting the 630 Splash and scoring the pinfall and winning the Mega Championship.
Winner: Alex Daniels