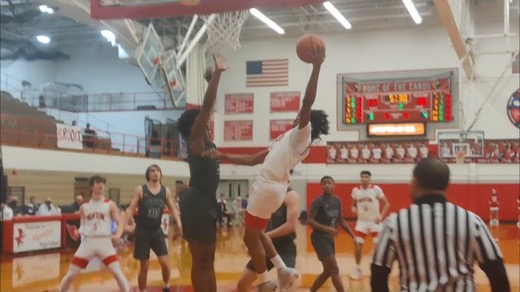 The undefeated Mentor Cardinals haven’t had a lot of experience playing in close games.

They beat Brunswick by six points before they matched up against Medina, who were looking to make a push for the Greater Cleveland Conference (GCC) title.

As anticipated, the matchup between the two came down to the last minutes. In the final minutes, the Cardinals came out with a 76-70 win over the Bees at home.

“Luke (Chicone) is 90 percent (from the free-throw line) in the last couple of minutes. Jonah (Waag) did a great job from the line; Steven (Key). That’s huge.”

As a team, Mentor finished 22-of-28 from the free-throw line.

Just like in the first matchup in Medina (10-4, 4-2 in GCC), Mentor forced a lot of turnovers in the second quarter after the first ended with a 20-20 tie. The 12 turnovers the Cardinals forced played key in taking a 40-34 halftime lead.

“I think we get after the ball and we defend,” Krizancic said.

“We get into the passing lanes for deflections. WE have an analytics guy for the first year. The turnovers were 7 (Mentor) to 24 (Medina). When you can win the turnover ratio by 17, that’s a huge factor in a game like this.”

Forced turnovers on one end, inevitably turned into points on the other end. Mentor’s guard Steven Key had the hot hand and didn’t waste the opportunity by scoring 19 first half points.

“Every game, Key is getting better,” Waag said. “We need to keep feeding him.”

The halftime intermission did not cool down the sharpshooting guard at all as he scored 14 third quarter points. One free-throw in the fourth quarter gave him a team-high total 33 points; tying a career high.

Leadership can be led by example in tight games. Mentors’ leadership came from their senior class Chicone, Ian Kipp, Key, Cael Gray and Waag which came from scoring, defense, making hustle plays and facilitating the ball.

“We all have experience, we all played varsity,” Waag said.

“It’s time to show that we are mature and we have good defense and as seniors, we have to show leadership. We showed leadership at the end and that’s how we got the (win).”

Cardinals’ guard Chicone, who has had more of a scoring role in the past, became more of a facilitator against Medina.

“Chicone was much more of a scorer last year..,” Krizancic said.

“Now with Steven (Key) and Jonah (Waag) scoring, you can’t just guard Luke (Chicone). So that is the good thing. He’s becoming more of a points guard, but I think defending this team is more of a ‘pick your poison.”

Medina’s coach Chris Hassinger, despite the loss, is now focused on preparing his team for the tournament.

“We’re done with the league now,” he said.

Mentor is probably not gonna lose another game. Now, our focus turns to the tournament as it does every year.”

This game was Medina’s first game back since the 22nd of January, because the program had to temporarily shut down.

Both Mentor and Medina will have home games up next for them as the Cardinals will host South (Willoughby) High School on Friday, Feb. 5 and the Bees will host Buchtel on Saturday, Feb. 6.