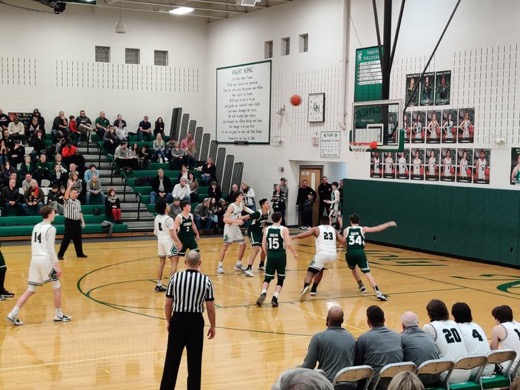 PARMA, OHIO – In danger of getting bounced by No. 7 seed Cloverleaf as No. 2 seed Holy Name trailed 35-25 at halftime, Green Wave coach Ryan Patton told his players to stick to the game plan.

“It’s a good group. I have some Seniors that have been in the game… We didn’t hit shots like we normally do. (Cloverleaf) was on fire. Let [the team] know to stick to the game plan and stay the course how we normally do. There is no need to panic.”

In the face of adversity, Senior guard Quintin Richardson came alive to drop 13 points in the third quarter, 22 total points to help the Holy Name come back and advance to the Division II, North Ridgeville District semifinal with a 70-65 win over the Colts.

He even made the 3-pointer before the buzzer signaling the end of the third quarter to give them the lead and the momentum shift.

“That’s ‘Q” (Richardson). He’s that type of player. I was blessed to have him as my point guard, because you are never out of the game with him [on the court]. He might not have had it going in the first half, but he’s the type of kid and the type of player that’s special enough where he can get a couple. He just needs to see that first one go in… That three, got our crowd back in [the game].

As the Green Wave crowd grew rapidly after the third quarter tsunami. Holy Name slowly began to extend their lead in the fourth quarter.

Jack Kenneally, and Tony Carter, their tallest players, got the buckets to close the game out.

Richardson also had a defensive presence in the fourth quarter as he blocked two shots and had one of his two total steals in there as well.

Carter had 11 points, nine rebounds, and five assists and 6-of-8 from the free-throw line.

As a team, Holy Name made 15-of-19 free-throws against Cloverleaf.

Their shooting helped the Colts go on a 12-3 run in the second half of the second quarter.

Cloverleaf’s trio of Brycen Holiday, Nathaniel Riley and Matthew Tanko were their driving forces on the scoresheet.

Tanko made all three of his 3-pointers to total 17 points. He cooled off in the second half.

Riley was their lengthy inside presence, who blocked four shots in the second quarter to go along with his 11 rebounds, three assists, and 17 points.

Holiday led the Colts with 20 points, while shooting 8-of-11 from the field and 3-of-5 from three. He also grabbed four rebounds.

His best score was at the end of the second quarter after Richardson scored an and-1 layup with eight seconds remaining in the half. After Richardson’s made the free-throw, Holiday made a three at the top of the key before the buzzer to give them the 10-point lead at halftime.

“[On defense] we weren’t talking as much as we should have [in the first half],” Richardson said.

“(Cloverleaf) set a lot of off-ball screens and we weren’t talking the way we needed to communicate and get through it all.”

Their defense improved with the help of a lineup change as the Green Wave used a smaller lineup, while still having length on the court with Kenneally and Carter on the court.

They are versatile players and fit in a small-ball style of play, according to Patton.