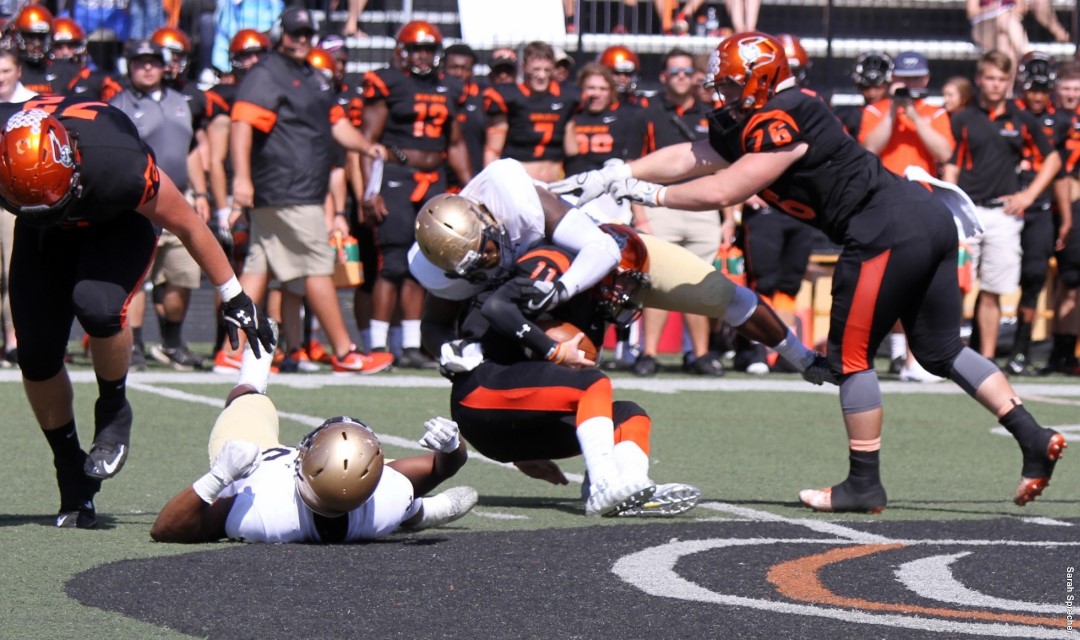 UNIVERSITY HEIGHTS – Avoiding big plays and limiting turnovers was a focal point for the John Carroll University football team at practice this past week.

Neither aspect of the game plan came to fruition.

The Blue Streaks threw five interceptions – two of which were returned for touchdowns – surrendered 448 yards of total offense, and converted 36% (5-for-14) of their third downs in a 47-21 defeat to Heidelberg on Saturday afternoon from Hoernemann Stadium in Tiffin, Ohio.

Eddie Williamson and Kody Kidd registered a pair of receiving touchdowns, while Arin Pruitt crossed the goal line from two yards out.

The loss snaps JCU’s 10-game winning streak in the OAC, a dominant stretch dating back to November 14, 2015 against the Mount Union Purple Raiders (L, 3-36).

The play-calling tandem threw back-to-back pick-sixes in the third quarter, turning a 27-24 deficit to a 40-14 hole in a nine-minute span.

Larkin took over in the fourth period, posting a 35.3% (6-of-17) completion percentage with 121 yards and an 11-yard strike to Kidd, the first of his collegiate career.

Running back Ro Golphin spearheaded the rushing attack on nine carries for 65 yards.

Pruitt barreled through a bevy of defenders for his first TD since October 22, 2016.

The Student Princes averaged 6.7 yards per play, primarily through a 73-yard connection between quarterback Tyler Stoyle and Tony Morris.

Demetrius Magee tacked on a 29-yard touchdown, igniting the home crowd and eventually knocking off the ninth-ranked team in the nation.

Stoyle finished with 317 yards through the air, sending defensive coordinator Kyle Hoke back to the drawing board ahead of Week 4.