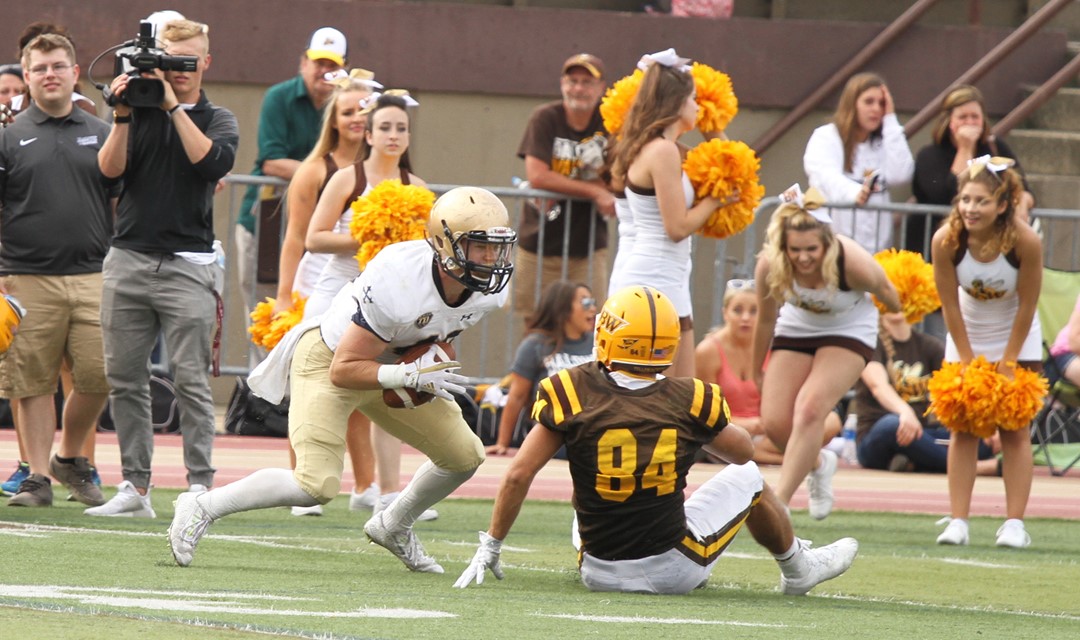 Ro Golphin and Stan Elad II crossed the goal line on the ground, Anthony Moeglin and William Woods connected for six through the air, and Michael Connick fended off a late-game rally with his first career interception to propel the Blue Streaks (1-1) over the Baldwin Wallace Yellow Jackets (1-1), 24-21, on Saturday afternoon at George Finnie Stadium in Berea, Ohio.

Facing a three-point deficit with 1:36 remaining in regulation, BW opted for the two-minute drill, beginning with a 24-yard pass from wide receiver Ty Gallo to quarterback Jake Hudson.

Tyler Frederick sacked Hudson for an eight-yard loss, Connick picked off Hudson in John Carroll territory, and Moeglin lined up in victory formation to cap off the tightly contested affair.

Connick filled in for the injured Ray Brewster, the primary ballhawk amid the team’s secondary.

With his job on the line, Moeglin – who spearheaded the Blue Streaks to the 2016 NCAA Semifinals – acclimated himself on the offensive side of the ball, completing 19-of-34 (55.9%) passes for 222 yards and a touchdown.

The Canton native sprayed his passes in all directions, finding seven different targets in the open field.

The rushing tandem comprised of Sam Kukura and Ro Golphin combined for 89 yards on 23 carries (3.87 yards per carry).

The Blue and Gold notched four sacks and broke up four passes to limit the opposition to nine first downs and 340 total yards.

Tyler Moran fronted the unit with five tackles, while Anthony Christopher, Tyler Frederick and Jimmy Thomas had a sack apiece.

Defensive coordinator Kyle Hoke will look to avoid the big play next week, as running back Austin Smith marched down the field for a 70-yard score and receiver Rob Wolfington gathered a 78-yard strike to erase JCU’s 15-point advantage.

Aside from his five kickoffs for 306 yards (61-yard average), kicker Matt Danko delivered the punishing blow on a 21-yard field goal with 9:07 left in the fourth quarter.

The Blue Streaks head to Tiffin, Ohio to take on the Heidelberg Student Princes next Saturday at 1:30 p.m. from Hoernemann Stadium.