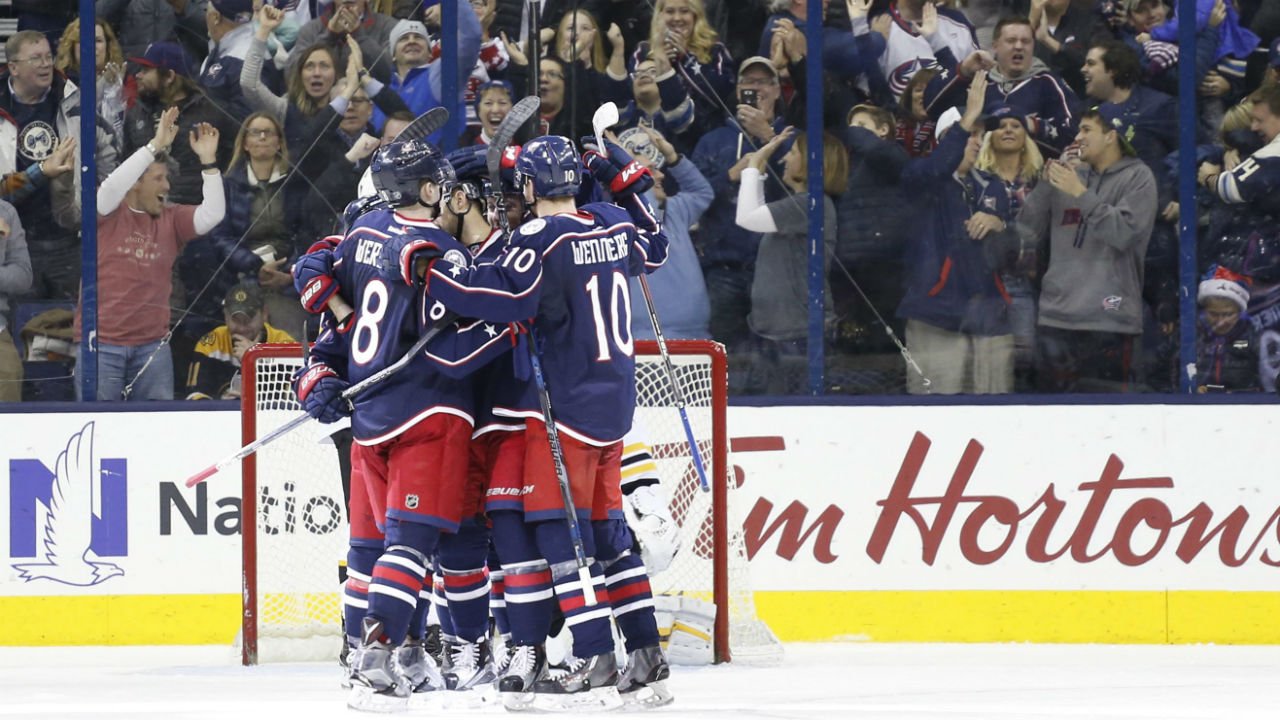 Tuesday night’s victory for the CBJ was by no means pretty. It was one of those wins that you’re just happy to squeak out and move on, but a win is a win none the less.

The Blue Jackets faced off against the pesky Boston Bruins. The Jackets have struggled with the Bruins, who won both meetings earlier in the season.

The Jackets wasted no time making the cannon fire when Scott Hartnell snuck behind the defensive to set up shop in front of the goal. Hartnell proceeded to flip a rebound past Tuukka Rask for the early 1-0 lead. The goal was Hartnell’s ninth of the season.

It started to get a blowout vibe, when just five minutes later at the 8:47 mark of the first, Seth Jones hammered a beautiful feed from Scott Hartnell into the top corner of the net. Giving the Blue Jackets a 2-0 lead in a hurry.

The first ten minutes of the game were complete dominance for the CBJ.

Less than a minute after Jones’s goal, Matt Calvert added to the lead, scoring his fifth goal of the season. Calvert would snag his own rebound, before blasting a shot past Rask.

Two of Boston’s goals would come late in the first period. They would then tie the game at 3 at the end of the second period, paving the way for a third period that was sure to include some drama. Luckily for the Blue Jackets, the drama favored the home team.

Midway through the third period, still tied at 3, and the Jackets have just started attacking on a power play. Nick Foligno clocked into work directly in front of the goal and chopped away at the loose puck until it found the net, for his 11th goal of the season.

The puck was fed to Foligno by Zach Werenski and Alexander Wennberg.

This mid-period goal proved to be the difference as the CBJ were able to hold off Boston to win their 13th consecutive game by a score of 4-3.

The Jackets were outshot 40-22, on what coach Tortorella called a “slopfest.” Tortorella also joked that he had “lit a match to the tape already.” Due to a very lackluster win.

Bobrovsky, although giving up more than his normal share of goals, still managed to save 37 of 40 shots by the Bruins. Bob once again played a key role in a big time victory over an opponent who have had the Jackets number in the past.

Sloppy wins are remembered only one way….as a win. It doesn’t really matter how the CBJ got it done, the important part is that they found a way. They came together as a team and found a way to endure through a tough opponent.

There are currently only five teams in NHL history that have had longer win streaks than this years Jackets. The win streak stays alive for now at lucky number 13. The CBJ will look to push that number to 14 when they make the trip up to Winnipeg Thursday to take on the Jets.

Watch full highlights of the game below: