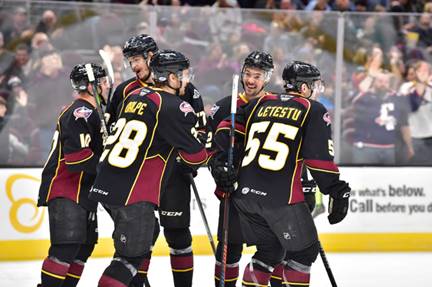 The AHL’s Cleveland Monsters defeated the Milwaukee Admirals in overtime on Sunday at The Q by a final score of 6-5. With the win, the Monsters are now 26-23-6-1 overall this season and with 59 points, remain alone in sixth place in the AHL’s North Division standings.

Cleveland grabbed a 1-0 lead on Sunday when Zac Dalpe struck for a power-play goal at 6:56 of the opening period thanks to Adam Clendening’s lone assist.

Then, Dillon Simpson pushed the Monsters’ edge to 2-0 with an even-strength tally at 8:06 on feeds from Tommy Cross and Nikita Korostelev before Milwaukee’s Justin Kirkland cut the lead in half with a five-on-five marker at 9:16 of the opening stanza.

In the second, Milwaukee leveled the score at two apiece with an even-strength Laurent Dauphin finish 37 seconds into the period, but Cleveland re-claimed the lead at 10:40 when Justin Scott posted an unassisted shorthanded score to make it 3-2 Monsters.

Kevin Stenlund pushed Cleveland’s edge back to a pair of goals at 4-2 when he delivered an even-strength conversion at 16:42 courtesy of helpers from Sam Vigneault and Kole Sherwood.

Stenlund struck again at 1:36 of the third for an even-strength finish that made it 5-2 Cleveland with Sherwood and Cross collecting assists on the play, but Milwaukee posted three unaswered even-strength goals the rest of the way from Nicholas Baptiste at 9:19, Baptiste again at 15:10 and Eeli Tolvanen at 17:46 to force overtime.

In the extra session, Monsters forward Mark Letestu notched his team-leading fourth game-winning score of the season at 4:59 to claim a 6-5 victory for Cleveland with Cross and Dalpe setting up Letestu’s team-best third overtime goal of the year.

Cleveland goaltender Jean-Francois Berube stopped 30 of the 35 shots he faced to improve to 18-16-5 this season while Milwaukee’s Tom McCollum fell to 9-9-9 between the pipes this year despite a 37-save performance.

Next up for the Monsters, it’s a Thursday home clash vs. the Laval Rocket with full coverage, live from The Q, underway at 7:00 pm.