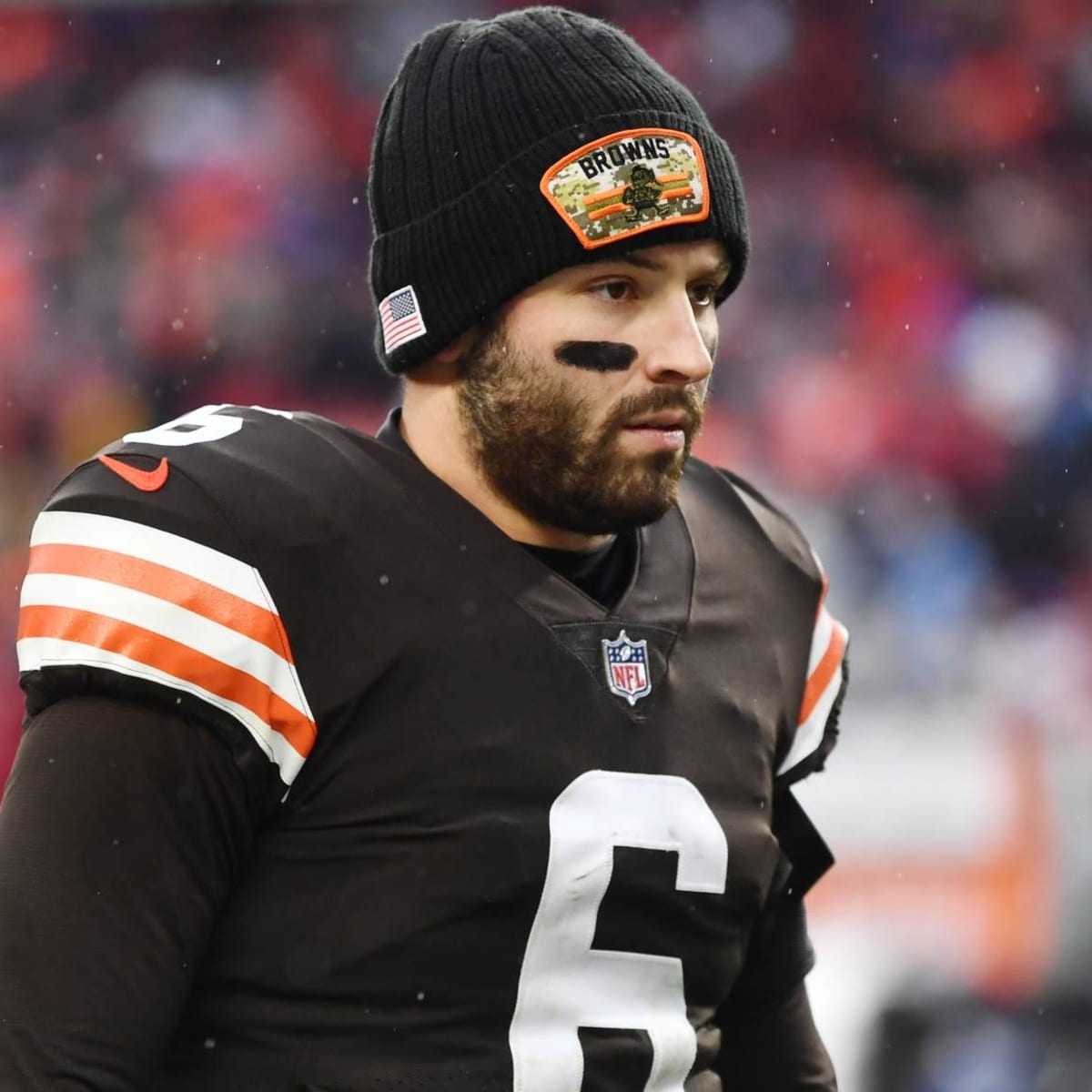 A new QB in Carolina: The #Panthers are acquiring former No. 1 overall pick Baker Mayfield from the #Browns for a 2024 conditional 5th-round draft pick, sources tell me and @TomPelissero. Deal is pending a physical. All parties split the financials to make it happen. pic.twitter.com/xuTLqosmZm

The Browns and Panthers have officially worked out a deal to send Baker Mayfield to the Carolina Panthers for a 2024 conditional fifth round draft pick (could be fourth depending on playing time). According to Mike Garafolo, Cleveland will pay their former first round pick 10.5 million this year, saving eight million towards their cap space. Carolina will pay five million and Baker has agreed to a $3.5 million dollar pay cut that can be earned through incentives.

Baker was scheduled to make $18.858 million with the Browns this year.

Now the Panthers, who face the Browns in week one this year, have both the first and third picks in the 2018 draft with Baker and Sam Darnold.

Both QBs haven’t made a single Pro-Bowl in their careers.

The #Browns and #Panthers play each other Week 1. pic.twitter.com/NEO0uFZzqZ

2018 First Choice and it begins

General Manager John Dorsey, after much debate, chose Baker first overall in the 2018 NFL Draft. Hue Jackson, head coach at the time, decided to start Tyrod Taylor from week one. During the third game against the New York Jets, Taylor sustained a concussion, and Mayfield led the team to the win on that Thursday night in Cleveland and ended a 19 game winless streak, the longest in Browns history. 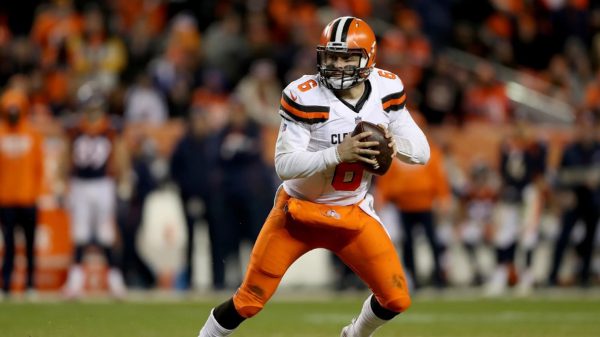 The love affair with #6 began that night. Fans will say that the 2018 season was the first fun season in a long time. In fact, Baker had the team on the cusp of the playoffs until week 16 with Greg Williams replacing a fired Hue Jackson as head coach and Freddie Kitchens working the offense. Baker broke the NFL’s touchdown record for a rookie QB, eclipsing the record held by Peyton Manning.

The Browns started the season with high hopes as Freddie began his first year head coach. Excitement on improving from the 7-8-1 record from last season was high. Unfortunately, the Browns ended with a 6-10 record and a new head coach and general manager to find. 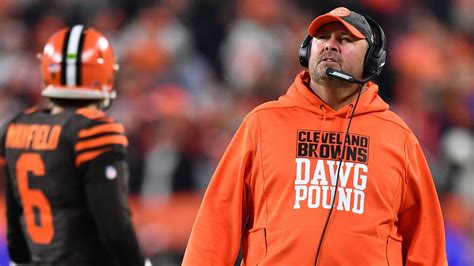 Baker had only one this season. He had four in his rookie campaign. This would be the weakest statistic on his resume.

Yet it still turned out to be a losing season with the dawn of a new head coach and general manager search, which seem to be a yearly Christmas/New Year’s holiday gift from the Browns to their fans!

2020 Playoff win over the Steelers and near miss

The Browns quickly chose Andrew Berry from the Eagles and Kevin Stefanski from the Vikings as the new GM and HC team leading the Cleveland Browns. It was also Baker’s third new coach and offensive system. 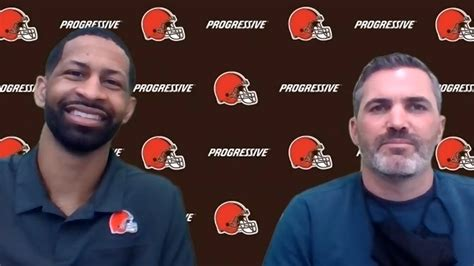 How to describe this season with Baker at the helm? 11-5 record. 2 fourth quarter drives to win games. Playoff win over the hated Pittsburgh Steelers and a near upset of the Kansas City Chiefs in the Divisional Playoff Round. Baker was ranked 11th in QB stats overall.

Stefanski’s system seemed to work for Baker, with a strong running attack and shorter passes to tight ends. The COVID season saw the Browns lose coaches and players but still somehow managed to win, especially the playoff game against the Steelers, with Stefanski watching from this home theater office! 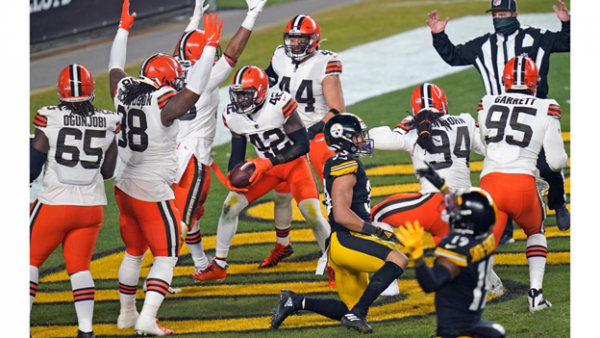 If we need to find a crazy way to describe the season for Baker, let’s take a page from The Drive, The Fumble and The Shot to include The Injury. 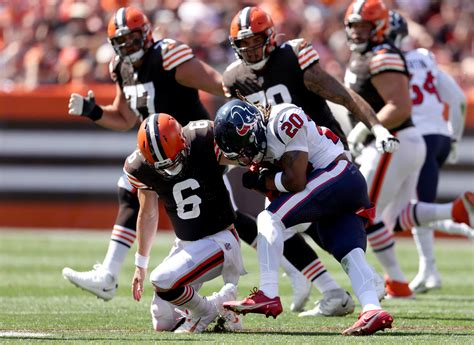 The year started with Baker asking the Browns for contract discussions. The Browns demurred. “Let’s see how the year goes,” was the thinking.

Well, in week two, Baker tears his labrum attempting to tackle the Texan defender Justin Reid after an interception. He and the Browns were really never the same after that. Add to that Arizona Cardinal defensive end JJ Watt’s tackle that really messed up the shoulder socket. The final 2021 record was 8-9. You could make the case that the Browns might have been blinded by the injury so early in the season with so much promise.

His final ranking of 25th of all QB’s for 2021 can be attributed to many things: play calling, indecision, dropped passes, OBJ and his dad, and Mayfield’s injury. With no fourth quarter comebacks, he is now in 24th place in that department.

The drama in the organization regarding Baker’s injury and his availability week to week was an ongoing source of material for every media outlet and fan in the city. Everyone voiced their opinions from “sit him” to “suck it up.” It was chaotic being a fan last year. And the Browns were extremely guarded in their discussions with the media. 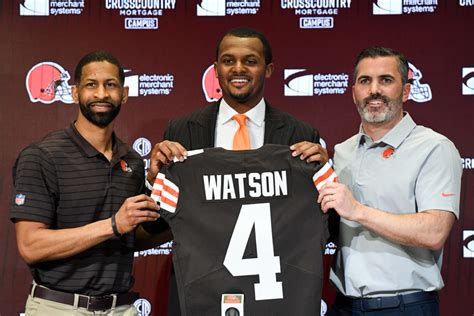 Sometime during the 2021 season top Browns administrators wanted to find alternatives to the QB position. As the season played out, little did fans know what was to transpire.

More teams than the Browns were interested in the former two-time MVP and 2020 passing yards leader for the Houston Texans. But here is a timeline of the “Browns Ides of March!”

March 18, 2022 – Watson agrees to waive his no-trade clause to be dealt to Cleveland, one day after the Browns were informed, they were out of the running for the quarterback. Watson is acquired by the Browns for multiple first-round picks and signs a fully-guaranteed five-year, $230 million deal. While it sets a record for largest guaranteed contract in NFL history, his 2022 salary is set for just $1 million. (Directly from NBCnewyork.com)

Thank you, Baker, or good riddance?

Whether you feel he got a raw deal with different head coaches and offensive coordinators, or maybe he was the reason there was so much tension last season, what is true is he brought some pride and fun back to FirstEnergy Stadium. But Mayfield never showed on film to be improving, only regressing. The Orange and Brown Report, with Jake Burns, does an outstanding job on Mayfield’s strengths and weaknesses.

But now with Baker a Panther and Watson looking at some sort of suspension, the Browns 2022 season is in disarray. But what else do we expect from this team? Continuity? Ah…nope.