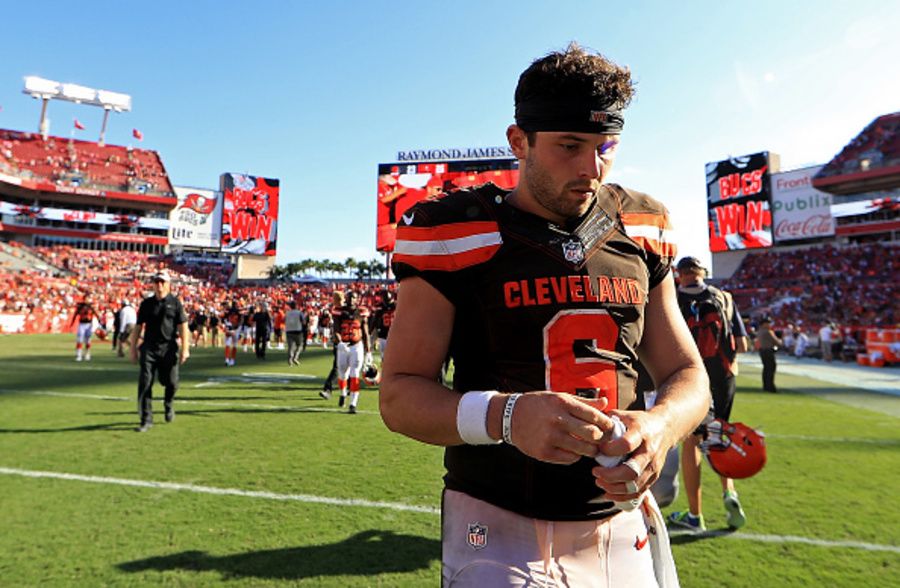 CINCINNATI – Just four weeks ago the Browns were dismissing Hue Jackson from his post as the team’s head coach. It didn’t take long for Jackson to land on his feet though, as just two weeks later he joined the Cincinnati Bengals staff as a special assistant to head coach Marvin Lewis.

Ironically the Bengals still had two meeting with the Browns on their schedule making a reunion with his former team inevitable. Part one was Sunday when the two division and in-state rivals faced off down in Cincinnati and it was Cleveland getting the better of Jackson and his new team with a decisive 35-20 win.

Afterward, Jackson an awkward scene ensued when Jackson attempted to hug it out with Baker Mayfield, the rookie quarterback he coached not so long ago.

The moment was captured by cameras…

Hue Jackson went for the hug and Baker hit him with the “we’re just friends” handshake ? pic.twitter.com/khycq8Vhik

In his postgame press conference a miffed Mayfield explained why he denied his former coach of a hug.

“Left Cleveland, goes down to Cincinnati,” Mayfield asserted. “I don’t know. That’s just somebody that’s in our locker room asking for us to play for him and then goes to a different team we play twice a year. Everybody can have their spin on it, but that’s how I feel.”

Mayfield’s remarks shouldn’t come as much of a surprise. There have been numerous reports that Mayfiels wasn’t much of a fan of Jackson when he was in Cleveland, despite the fact that he’s adored by many other players for being a players coach.

When Jackson joined the Bengals staff two weeks ago, Mayfield commented about Jackson’s decision to jump to a division rival so quickly, referring to the move as “a quick turnaround.” It probably didn’t help that Jackson spent that two weeks away from football clearing his name of any wrongdoing before then signing on with Cincy.

Either way, the situation clearly rubbed Mayfield the wrong way. Safe to say he probably won’t be sending Jackson a Christmas card this year.