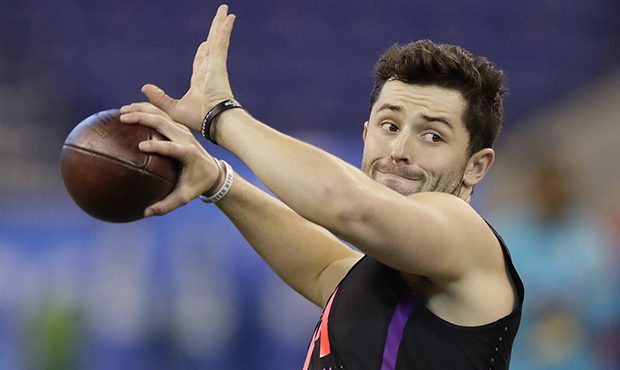 The Cleveland Browns started their rookie minicamp today.  Baker Mayfield talked to media after practice and touched on a wide variety of topics. Mayfield started off by saying it has been a very exciting week and said that ‘going to work like a walk on’ never ends, “Never. It does not. For me, it is a fresh start. Once you are drafted, it does not matter. I will just say this, in the team meeting, we talked about how it does not matter how you get here; everybody has the same opportunity. What are you going to do with it? What work are you going to put in to put yourself in the best position possible to play and make the roster? For me, that is something that I know how to do. I have been in this position before so I can only try to handle it the same and work harder.”

Mayfield went on to say he needs to establish a leadership role in Cleveland, “I have to continue my strengths. Leadership is one of them. When you talk about that, it is about earning the respect of the guys in the locker room. The veterans, guys that have been doing it for a while, I have to earn their respect. You can’t talk about it and earn their respect. You have to go to work. You have to put your time in. You have got to earn the playbook. When you get your opportunity, you have to show that you are there for a reason. That is how I do it with the veterans. With the rookies and everybody else here right now, I just have to be that guy in the locker room, be that guy that gets everybody going and show them that we are all here for a reason.”  He also said he can help turn around the franchise, “It is a mentality. It is a mentality that you are not going to take no for an answer. It does not matter what has happened in the past. It is about what are you going to do for it now. How are you working towards making this team better? It starts in the locker room, and that is why you bring in some of the guys that this franchise has been bringing in. You change the culture in the locker room, and you get some belief in it. We do not have to talk about it. We know what we have in there. We will just handle it from there.”

Baker went on to say that Browns’ fans deserve a winning team, “It is an exciting feeling right now. There is a lot of buzz going around, which is great for the team. The one thing I keep hearing about is the loyalty of the fans, and I think about how they deserve a team that is winning, a team that they can rally behind. That is what they will do no matter what. I got a chance last night to be at a dinner with some of the veterans and some of the alumni, and they talked about it, as well. This franchise is built on winning. They have been winning in the past, and some of those guys set the tone. Right now, we are trying to get back to that.”

Mayfield talked about other Cleveland teams as well.  Mayfield was asked about his first pitch last week for the Indians, “Football and baseball releases are a little bit different. Yes, I would love to [have a re-do]. Thankfully, I was never a pitcher so we are good. [I played] Shortstop and third base. Anywhere in the infield, honestly. You have got to be quick. You have got to be quick on the hot corner, that is for sure.”  Mayfield also talked about Cavaliers’ Star Lebron James, “Obviously, he is one of the greatest athletes to ever play sports in general. I am excited to be here. Hopefully, I will get a chance to go watch him play, but right now, my focus is on football.”

Key dates that remain in the Browns offseason
QB competition may not be a distraction for Browns, but it will be for fans