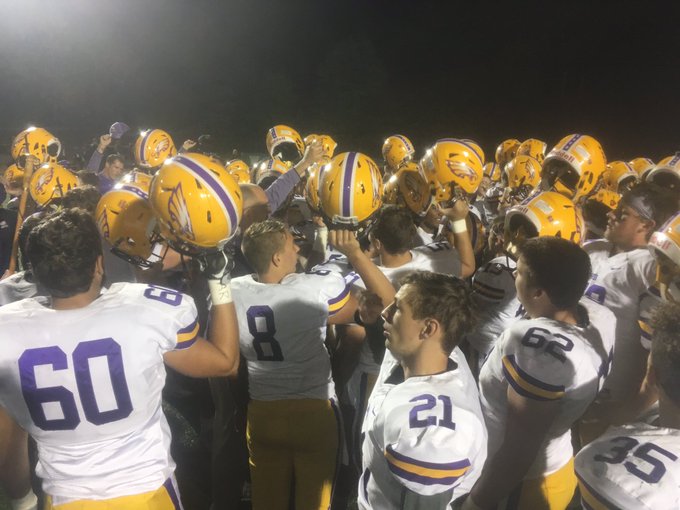 Tonight’s recap is brought to you by Crystalina’s Pizzeria, visit them at 36962 Detroit Rd, Avon, Ohio www.crystalinaspizzeria.com or call 440-934-1011, #thechoiceisCrystalclear

WESTLAKE, OHIO– Fall finally arrived at UH St. John Stadium Friday evening, making it a perfect night for football. As the Westlake Demons hosted the Avon Eagles on homecoming night, the mood was right for an upset, except someone forgot to tell the Eagles.

QB Ryan Maloy threw for 295 yards, four touchdowns, and ran for one score as the Avon Eagles spoiled the Demons’ party, 55-21. Maloy was the author of an array of big plays that often broke the backs of a very game Demon squad.

His accomplice tonight was WR Chris Mullins with an absolutely dominating performance as the senior wideout was open early and often catching TD passes of 77, 47, and 43 yards. He caught five balls for a whopping 193 yards.

The night was not without a valiant effort by the hosts as they were led by a surprisingly strong running game. Running back James Coleman ran for 162 yards on 27 carries and QB Billy Blood pitched in with 67 rushing yards of his own.

Blood also passed for 93 yards and a touchdown, but the biggest roar of the night came when 240 lbs. DL Jorden Taylor picked up a fumble on his own 25 late in the fourth and rumbled 75 yards for a touchdown.

Taylor went almost untouched, getting a key block at the Avon 25 and motored in for the score.

Maloy and Mullins twice hooked up for one play bombs, the first one, after an 80-yard game tying drive by the Demons, went for 77 yards.

The second was the very first play of the second half, a 43-yard dart, that for all intents and purposes, sealed the deal.

Late fourth quarter scores by RB Aaron Endrizal, and RB Trey Peters finished off the rout for the Eagles.

Avon moves to 6-0 on the season, 5-0 in conference play,  and undoubtedly will keep its hold on the Division II, Region 6 top spot in the state rankings.

Meanwhile, Westlake is still searching for its first win of the season, but not for lack of effort. Westlake is a very capable team who can play spoiler now that teams are vying for playoff spots. They have to be game planned for, or they could beat you.

Avon returns home next week to host Lakewood, while Westlake travels to Grafton to meet the Middies of Midview. Both game times are 7:00 p.m.